Zelenskyy Calls for a No-Fly Zone In Speech to Congress 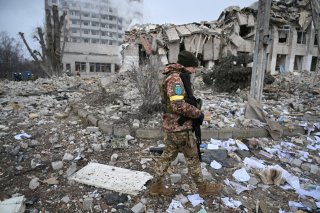 Ukrainian president Volodymyr Zelenskyy appealed for a no-fly zone and additional military aid in an address to Congress on Wednesday.

Zelenskyy reiterated his calls for a Western-enforced no-fly zone in Ukrainian airspace.

“This is a terror Europe has not seen for 80 years and we are asking for an answer to this terror from the world. Is that a lot to ask? To create a no-fly zone over Ukraine to save people. Is this too much to ask? A no-fly zone. Russia would not be able to terrorize our cities,” he said.

Kiev’s demand for a no-fly zone has been rejected on separate occasions by Washington, London, and NATO’s leadership.

A no-fly zone would require the enforcing party, whether the United States or a broader NATO coalition, to shoot down Russian aircraft in Ukrainian airspace, all but guaranteeing the prospect of a larger European conflict.

Though Zelenskyy and other Ukrainian officials have continued to call for a no-fly zone over the past week, there is no indication that any of the major NATO members have shifted their stance that a no-fly zone would be a dangerously escalatory measure at a time when the West is trying to keep the conflict contained within Ukraine’s borders.

Knowing that the United States has opted against a no-fly zone, Zelenskyy proposed an “alternative” measure: "Aircraft, powerful, strong aviation to protect our people, our freedom, our land. Aircraft that can help Ukraine. You know that they exist, that you have them, but they are on the Earth, not in the Ukrainian sky. They do not defend our people."

But the Biden administration has also ruled out sending fighter jets to Ukraine. The Pentagon rejected a Polish scheme involving the transfer of MiG-29 fighters to Ukraine by way of the U.S. Ramstein Air Base last week, with a U.S. defense official telling reporters that Ukraine likely does not need more planes at this moment and can fight more effectively with its Western-supplied Stinger anti-aircraft and Javelin anti-tank missiles.

Regarding non-military measures, Zelenskyy urged Congress to implement “new packages of sanctions against Russia.” The Ukrainian president added that “all American companies must leave Russia from their market, leave their market immediately, because it is flooded with our blood. Ladies and gentlemen, members of Congress, please take the lead, if you have companies in your districts who finance the Russian military machine … you should put pressure.”

Successive waves of western sanctions since February 24 have dealt a significant blow to Russia’s economy; investors reportedly expect that Russia will have no choice but to default on its debt in the near future, further isolating it from the global financial system.

Zelenskyy’s address included a graphic video depicting wartime atrocities that Ukrainian officials say were committed by the Russian military. Zelenskyy reiterated the position, commonly echoed in Kiev’s ongoing appeals for the West to directly involve itself in the conflict, that Ukraine is not just fighting for itself, but for “democracy all over the world.”