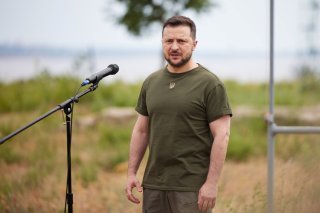 Ukrainian president Volodymyr Zelenskyy said the Russo-Ukrainian War could end in “the next few months” whilst reaffirming his rigid stance against possible concessions to Moscow.

"The war will end either when Ukraine wins or when the Russian Federation will wish for it,” Zelenskyy said during a Wednesday appearance at the New York Times’ DealBook Summit. “It may happen so that Russia will only wish for it when it realizes that it is weak, isolated and has no partners. We hope that it will end in the next few months."

Zelenskyy rebuked a peace plan proposed in October by business magnate Elon Musk. “This is very important, because at some point, Putin—and it seems that Elon began to change his opinion and we began to hear all kinds of appeals,” he said. “I don’t know if somebody’s making an influence on him or he’s making those choices himself. I always say very openly, if you want to understand what Russia has done here, come to Ukraine and you will see this with your own eyes, without any extra words, and after that, you will tell us how to end this war, who started it, and when we can end it,” Zelenskyy continued.

Musk’s plan included the formal recognition of Crimea as part of Russia, new elections in parts of eastern and southern Ukraine under United Nations supervision, and neutral status for Ukraine. The proposal was welcomed by voices calling on Western governments to make efforts toward facilitating a peace settlement in Ukraine, but it prompted vigorous condemnation from the Zelenskyy administration and other proponents of a maximum pressure strategy against Russia.

Top Kyiv officials have all but rejected the prospect of making significant concessions to Moscw, insisting in recent months that the war can only be brought to an end through an unambiguous victory over Russia. Zelenskyy signed a decree earlier this year forbidding peace talks with the Kremlin as long as Russian president Vladimir Putin remains in power. The Ukrainian president partially walked back his categorical stance against negotiations on the heels of reports that the Biden administration was privately urging Kyiv to signal its openness to talks with Russia. Nevertheless, Kyiv is holding firm on preconditions for diplomacy that are likely to be nonstarters for Moscow: the return of all Russian-occupied territory, reparations, and the prosecution of accused war criminals.