Zuckerberg in Leaked Audio: I Will 'Go to the Mat' Against Warren 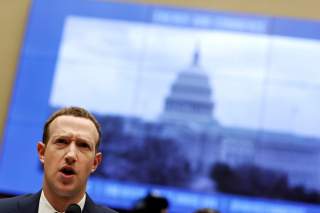 Warren, a Big Tech adversary, is campaigning largely on ideas to break up tech giants like Facebook, Google and Amazon to “promote more competition,” as she wrote in a Medium post announcing her proposal to impose new rules on tech companies that make $25 billion or more in annual ad revenue.

Today we’re publishing highlights from two hours of leaked audio in which Mark Zuckerberg rallies Facebook against critics, competitors, and Sen. @EWarren. It’s a fascinating look at a company under siege. https://t.co/5Hkkdfma8V pic.twitter.com/N5VYPa8Nn2

“Does that still suck for us? Yeah. I mean, I don’t want to have a major lawsuit against our own government. That’s not like the position you want to be in. We care about our country and want to work with our government to do good things. But, look, at the end of the day, if someone’s going to try to threaten something that existential, you go to the mat and you fight,” he added during the internal Facebook meeting.

Warren responded to Zuckerberg’s leaked comments in a Tuesday tweet.

“What would really ‘suck’ is if we don’t fix a corrupt system that lets giant companies like Facebook engage in illegal anti-competitive practices, stomp on consumer privacy rights, and repeatedly fumble their responsibility to protect our democracy,” the Massachusetts senator wrote.

What would really “suck” is if we don’t fix a corrupt system that lets giant companies like Facebook engage in illegal anticompetitive practices, stomp on consumer privacy rights, and repeatedly fumble their responsibility to protect our democracy. https://t.co/rI0v55KKAi

“Every week I do a Q&A at Facebook where employees get to ask me anything and I share openly what I’m thinking on all kinds of projects and issues,” the Facebook founder wrote.

“The transcript from one of my Q&As a few months ago just got published online — and even though it was meant to be internal rather than public, now that it’s out there, you can check it out if you’re interested in seeing an unfiltered version of what I’m thinking and telling employees on a bunch of topics,” he continued.

Warren’s plan to break up Big Tech aims to pass legislation that would require tech giants to be designated as “platform utilities,” which would bar them owning themselves as well as any participants on their platform, and hire regulators to reverse anti-competitive tech mergers.

Yet despite all her efforts to combat Facebook’s power, her campaign actively relies on the social media giant to target potential voters. She spent more than $2 million on Facebook ads between May 2018 and May 2019, Facebook’s ad archive shows.