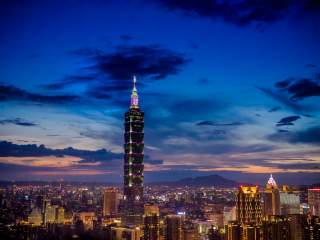 On October 26, Lieutenant General Peng Sheng-chu (彭勝竹) formally assumed the post of director-general of Taiwan’s lead intelligence agency the National Security Bureau (國安局 or NSB). The NSB is the country’s premier intelligence collection and analysis organization with the responsibility to “direct and coordinate the activities of the national intelligence community,”akin to the role of the Central Intelligence Agency. Peng ‘s appointment to replace Army Reserve Lieutenant General Yang Kuo-chiang (楊國強) as director of the agency marks the first time that the air force is at the head of the NSB, as well as the Ministry of National Defense (MND).

Peng is of the Hakka minority and previously served as the 18th commander of the Republic of China (ROC) Air Force from July 2007 to July 2009. The new NSB chief graduated from the ROC Air Force Academy in 1971, Taiwan’s National Defense University in 1984, and the US Air War College in 1993. In July 2002, Peng became chief of the president’s bodyguard detachment during the Chen Shui-bian administration, and was quickly promoted to principal of the ROC Air Force Academy in May 2003. He was then elevated to chief of staff of the ROC Air Force in December 2004 and served as the director-general of the Military Intelligence Bureau (MIB) from June 2005 to April 2006. After his time at MIB, Peng was promoted to deputy chief of the general staff of the ROC Armed Forces. Later, former KMT president Ma Ying-jeou selected Peng to serve as one of his 11 strategic advisers (戰略顧問) in 2009. Peng also served as air attaché at the Taipei Economic and Cultural Representative Office in the United States.

Peng’s meteoric rise as head of the MIB, Air Force commander, and as deputy chief of the general staff suggest that he was being groomed for a leadership position early on. His appointment as head of the lead intelligence agency seems to signal the Tsai administration’s emphasis on strengthening intelligence cooperation and counter-intelligence efforts. Indeed, Taiwan’s espionage problem has grown more problematic over the last decade. A spy case revealed in early October relating to a retired air force captain, Chen Kuo-wei (陳國瑋), highlights the persistent challenges facing Taiwan’s counter-intelligence environment. The MIB, which is subordinate to the MND’s General Staff Headquarters, has a heavy counter-intelligence portfolio. Furthermore, Peng’s stint as a student at the US Air War College, military instructor to the Singaporean Air Force, and air attaché to the United States seems to signal the new administration’s intent to deepen defense intelligence sharing between Taipei and Washington as well as other countries.

Peng is labeled by some in the media as being a member of the “Yushan Faction” (玉山幫), which generally describes a group of military officers promoted through the ranks under the Chen administration. According to one report, the previous DPP administration promoted three generals (first class) and 27 generals (second class). The military has traditionally remained a bastion of political support for the opposition Nationalist Party (KMT). As Captain Bernard D. Cole, USN (Ret.) notes, “The Military Intelligence Bureau (MIB) comes with a very checkered historical background, descending from units organized during the earliest days of the revolution, heavily politicized, and completely controlled by the KMT.” The previous DPP administration, after it first took power in 2000, promoted more officers within the military, ostensibly to gain their support. Indeed, Lieutenant General Peng is one of the military officers that was promoted up the ranks during that period, and his ascendance to the top of the NSB may represent a slow but gradual balance of influence for the DPP over the military and national security apparatuses.

The main point: NSB chief Peng Sheng-chu’s appointment may signal the new administration’s emphasis on counter-intelligence and its intent to deepen defense intelligence sharing between Taipei and Washington, as well as other countries.