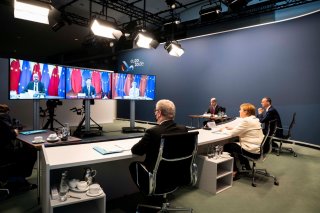 While China had declared 2020 a critical year for relations with Europe, the EU-China virtual summit which took place on September 14 between Chinese president Xi Jinping and EU leaders German Chancellor Angela Merkel, European Council head Charles Michel, and Commission President Ursula von der Leyen fell short of expectations. Some Europeans were optimistically hoping to conclude the negotiations on the long-awaited Common Agreement on Investment, which have now dragged into their seventh year. Others in Brussels were relieved that the summit didn’t take place in Leipzig in the presence of the twenty-eight leaders (twenty-seven EU countries and China) as was originally planned by Germany, the holder of the six-month rotating presidency. In the end, despite statements about what has been achieved in the meeting by European leaders—addressing Chinese state aid and addressing technology transfers from Europe to China—the actual outcome had little substance. In particular, China did not agree on economic reciprocity—the primary demand from the European side.

The meeting—although depicted as a decisive diplomatic victory by Chinese state media—was especially disappointing to Chinese leadership considering they were trying to accomplish larger geostrategic goals. One was to prevent the creation of a united transatlantic front against China, spurred on by recent visits to Western and Central Europe by U.S. Secretary of State Mike Pompeo and National Security Adviser Robert O’Brien. Rejecting any kind of strategic alignment either in the direction of the United States or China, President Charles Michel told reporters afterward “Europe is a player, not a playing field.” The second broad Chinese goal was to reassure Europeans after souring relations this year after coronavirus. Still reeling from the pandemic, the accompanying economic recession, and now—what many perceive to be an opportunistic expansion of Chinese aggression—Europe has recently channeled pain and anger into pushback on contentious foreign policy issues against China, mainly on Huawei (5G) and Hong Kong, but also on the treatment by the PRC of the Uighur minority in Xinjiang.

The meeting was unlikely to succeed even before it began. Leading up to the virtual summit, China’s top two diplomats—Politburo member Yang Jiechi and Foreign Minister Wang Yi—were specially dispatched in advance to lay the groundwork for the meeting and to ensure its success. Their parallel “charm offensive” led them to visit no less than seven countries in early September: while Yang toured Spain and Greece, Wang travelled to Italy, the Netherlands, Norway, France, and Germany. But the visits by the two senior Chinese diplomats achieved little.

While the efficacy of their strategy might be clear, it’s worth interpreting that strategy in greater detail. The striking difference in itineraries between the two suggests a subtle pattern in how China’s top two diplomats operate as a tag-team working in parallel. While Wang’s responsibility is to handle inevitable strain in public, Yang more often shuttles quietly under the radar in private to foreign capitals before state visits by Xi Jinping—laying the groundwork and negotiating key outcomes in advance. Even while the pandemic was raging and Wang remained in Beijing, Yang this year made stops in Germany, Japan, and now most recently Singapore, South Korea, and Myanmar.

Wang’s schedule in Rome, Amsterdam, Oslo, Paris, and Berlin notably included some of China’s most difficult relationships in the world. At a time when Chinese “wolf warrior” diplomats, on the whole, are growing more belligerent in response to the rising wave of global anti-Chinese backlash in the wake of the pandemic, Wang was in character. Hit with public repudiations on human rights by nearly all, confronted with an icy history with Norway over the Nobel Peace Prize, and threatening that the Czech senate speaker would “pay a heavy price” for leading a delegation of ninety to Taipei—Wang lived up to his tough public image in the increasingly hostile global arena. He also cast doubt on the origin of the coronavirus: “Where did it actually originate? Who was the zero patient?” Although Wang was granted the honor of a presidential audience with President Emmanuel Macron in Paris, his joint press conference in Berlin with German foreign minister Heiko Maas did not go so well. Biting questions ranged from the detention of Uighurs in Xinjiang, to the suppression of Hong Kong’s autonomy, to Beijing’s lack of transparency with regard to the origins of coronavirus.

Yang Jiechi’s low-key trip in contrast brought almost no public prosecution, as usually is the case. As Wang’s superior, Yang is often shielded with diplomatic cover by his subordinate’s louder activities. The two’s public image and communication style is also carefully tailored to their contrasting roles. While Wang delivered a bold pre-recorded speech on U.S.-China relations in early July, striking a conciliatory tone and hoping to ease escalating tensions, Yang—who has a direct tie to the politburo’s powerful standing committee—preferred to transmit his own message by publishing a lengthy twenty-one-page signed article.

Which of the two diplomats Beijing elects to send also gives hints into China’s diplomatic intentions. In June, with U.S.-China relations in freefall, U.S. Secretary of State Mike Pompeo and Yang met behind closed doors in Hawaii for seven hours of talks, but ultimately and unsurprisingly failed to halt the escalation. But also unsurprising was China’s decision to send Yang in place of Wang—choosing not to fight fire with fire given Wang and Pompeo’s similar hardline personalities. Sending Yang, who has a softer reputation for effective crisis management, under quiet cover with scant reporting was a signal that China was serious about negotiating in full candor with the bellicose American diplomat.

Returning to Europe, it should also come as no surprise that China’s top diplomats flew straight to Europe after the pandemic together to begin the process of rebuilding in what will likely be a long campaign to regain the world’s trust while giving up on outreach to the United States at least until the November elections. In the meantime, China is focusing on those countries caught in the middle even if Europeans explicitly shunned this passive, secondary role.

While Wang Yi sets the tone for the rest of China’s diplomatic corps, Yang Jiechi embodies the form of the more traditional Chinese diplomat. The two have revived a dual system of diplomacy with Chinese characteristics—the former publicly taking on the world to defend China while the latter works quietly in the shadows. Europe is just the first region to see this dual strategy put to work albeit quite unsuccessfully.

“With market access, it is not a question of meeting halfway, it is a question of rebalancing the asymmetry and a question of openness of our respective markets,” European Commission president Ursula von der Leyen said in a press conference, following September 14’s virtual summit with Xi. “China has to convince us that it is worth having an investment agreement.” The meeting was an important test on the efficacy of China’s new diplomacy in the post-pandemic age: given souring Sino-European relations, it will take much more effort to convince European leaders of Beijing’s goodwill to compromise on issues such as reciprocity, market access, or human rights.

John Ferguson is a Research Assistant at Mossavar-Rahmani Center for Business and Government at Harvard’s Kennedy School of Government.