China's Greatest Fear: Dead and Buried Like the Soviet Union 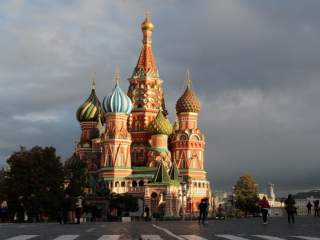 Twenty-five years ago, the mighty Soviet Union was finally thrown onto the ash heap of history—never to rise again. And yet, the fall of one of the most powerful empires in human history, we often forget, was never a sure thing. Indeed, looking back just ten years’ time, to 1981, very few people foresaw the demise of the USSR. In fact, many made predictions that it was America who was in for a rough patch in the years to come. Even a cursory survey of history from that era depicts an America still struggling to overcome a deeply ingrained malaise: the Soviets seemed on the march almost everywhere, the U.S. economy was in shambles, the nation was still reeling from the emotional scars of the Vietnam War as well as the resignation of a sitting president. The hits just kept on coming—a seemingly never-ending crisis, and what must have felt like a true “crisis of confidence.”

But here we are. The USSR is no more. The Warsaw Pact is gone. Gorbachev is doing Pizza Hut commercials. America clearly prevailed in one of the most spectacular geopolitical contests of our time—all without the burning embers of a nuclear fire that could have killed billions.

And while American’s today might make light of the past Soviet threat and its subsequent rapid collapse, one nation and its leadership is still very much interested in the death of the Soviet Empire: The People’s Republic of China.

So what does Xi Jinping and the Chinese Communist Party think really brought down the USSR? And what can they do to prevent it?

While a complete review of the literature would be simply too large for a mere blog post, one place to start is former Center for the National Interest Senior Fellow A. Greer Meisels article for the Diplomat in 2012. While debate in China has certainly advanced in the last four years, Meisels neatly lays out three possible reasons Chinese scholars see as the most likely cause of the collapse—and the most important areas to address:

The “Blame the Man” Concept

Was it simply all Gorbachev’s fault?

“For many in China in the late 1980s, early 1990s, and even until today, assessing blame for the Soviet Union’s collapse begins and ends with a single individual, Mikhail Gorbachev. This view seems to resonate most strongly with China’s more conservative leftists. During the height of Gorbachev’s reform efforts, there were people who argued that “within the CCP and within China intense ‘ideological struggle’ would be waged against Gorbachev’s ‘revisionism.’” Of course, since the Communist Revolution of 1949 few, if any, labels are more dreaded than “revisionist.” Even as recently as last year, the “Blame the Man” school of thought was en vogue. On March 1, 2011, the Chinese Academy of Social Sciences (CASS) released a new book, Preparing for Danger in Times of Safety: Recollections on the 20-Year Anniversary of the Collapse of the Russian Communist Party (居安思危: 苏联亡党二十年的思考), which concludes that the root cause of the collapse of the CPSU was not the Russian socialist system itself, but rather the corruption of the Russian Communists led by then-President Gorbachev.

“The debilitating effects of corruption are manifesting themselves in China today, so it’s no wonder that the CCP certainly in word, if not always in deed, seems desperate to wage war against this dreaded foe.”

The “Blame the System” Theory

While the core foundations of today’s Chinese and old Soviet economies and governments are vastly different, one can see through the lens of this school of thought why economic restructuring is so important to Beijing today:

“A second influential camp comprised of more liberal or reform-minded individuals saw the impetus of the collapse as being systemic – not a flaw in the socialist model itself, but rather in how it was executed in the Soviet Union. These people blamed domestic causes such as economic stagnation, mismanagement, excessive dogmatism and bureaucratic ossification for the Soviet Union’s collapse. These problems were certainly not solely the result of Gorbachev-era policies, but like a cancer that had been allowed to metastasize, spread over time throughout Eastern Europe and the Soviet Union.

“One could see why this “Blame the System” idea would gain traction with reform-minded Party members in China. After all, many of Deng Xiaoping’s reforms were an effort to combat just this sort of stale, stagnant thinking. . .”

Was the fall of the Soviet Union simply all America’s fault? Some in China think so—and might explain Beijing’s quest to rid Asia of its large U.S. presence:

“The “Blame the West” camp differentiates itself from the other two because it seems particularly consumed by fear of the United States’ policies and influence in the region. In fact one of this camp’s overriding concerns is that Washington would use its power to step up pressure on China to initiate regime change. Articles appeared in places like the People’s Daily and Hong Kong’s Wen Wei Po stating that the CCP was fearful of growing influence by “aggressive” Western powers as well as of outward signs of Party disunity. . . . These sentiments are still echoed and diatribes against American hegemony often find their way onto many a Chinese Op-Ed page.”

China Is Not the USSR (But It Should be Worried)

Seeing the Soviet collapse from Chinese eyes is important, especially as Beijing’s leaders look to reinvigorate their economy and polity in an effort to hang on to power. However, it seems clear that what China has evolved into at present is very different from where the Soviet Union was when it started its march towards terminal decline. Beijing’s markets and industries are a huge part of the global economy and supply chain. China does not have countless allies and partners to support around the world with expensive arms and endless subsidies. And best of all: Beijing is not pitted in a global contest with the U.S. for power and influence.

But whatever the differences, Beijing does have reasons to worry. Economic growth has slowed dramatically—or is possibly non-existent. China may grow old before it grows rich. In East Asia, Chinese moves over roughly the last decade have rattled the region, with nations around the wider Indo-Pacific slowly lining up to challenge Beijing’s quest for greater power and influence.

In the end, if history tells us anything is that the only constant is change. Perhaps it would be wise for U.S. Asia watchers to consider all futures when it comes to the Middle Kingdom—including what today might seem like the unthinkable.

Harry Kazianis (@grecianformula) is a non-resident Senior Fellow for Defense Policy at the Center for the National Interest, a non-resident Senior Fellow at the China Policy Institute as well as a fellow for National Security affairs at the Potomac Foundation. He is the former Executive Editor of The National Interest and former editor-in-chief of the Diplomat. The views expressed are his own.