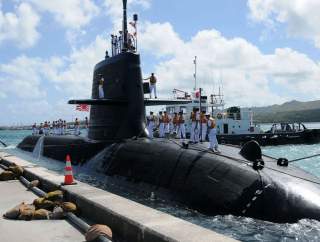 For years China has excelled at antagonizing Japan. Now Tokyo may have the chance to extract some revenge.

According to Indian news outlets, the Narendra Modi government has approached Japan about building it six stealth submarines.

“New Delhi has forwarded ‘a proposal’ to Tokyo to ‘consider the possibility’ of making its latest diesel-electric Soryu-class submarines in India,” Times of India reported on Thursday, citing unnamed sources.

New Delhi’s Project-75-India to acquire six advanced diesel-electric submarines will be worth more than Rs 50,000 crore ($8 billion), and likely much more. France’s DCNS, Germany’s HDW, Russia’s Rosoboronexport and Spain’s Navantia are all expected to compete for the contract. Since the submarines will be built in India, foreign companies that wish to compete for the contract are expected to form a joint venture with an Indian shipyard.

India’s proposal comes at a time when New Delhi and Tokyo have been steadily strengthening ties under the leadership of Modi and Japanese Prime Minister Shinzo Abe. Modi and Abe, both nationalistic leaders seeking to expand their respective countries’ regional profiles, are seen as enjoying a close relationship, which could help Tokyo’s chances in the competition. That being said, France, Germany and Russia have all built submarines for India in the past, TOI noted.

The proposal also comes at a time when Japan is seeking to break into the global arms market following the lifting of a decades-old, self-imposed ban on selling weaponry abroad. Since the ban was rescinded, Japan has already discussed selling India ShinMaywa US-2i sea-and-rescue amphibious planes.

Tokyo is especially keen on breaking into the global submarine market, which is currently dominated by countries like Russia, France and Germany. Defense analysts believe Tokyo’s Soryu-class submarines will be a highly competitive alternative to their Russian, French and German counterparts. As frequent TNI contributor Robert Farley noted last September:

“At 4,200 tons submerged, the Soryu-class is considerably larger than either the [German] Type 214, [French] Scorpene, or improved [Russian] Kilo, and can carry a much heavier weapons load. This size also makes them quieter and longer-ranged than the other boats on the market. At current price expectations of around $500 million, the Soryus are not wildly more expensive than the other boats.”

Already, Japan has been engaged in intense discussions with Australia over the latter’s program to purchase 12 diesel-electric submarines. Winning the Project-75-India contract would be a further boon to Mitsubishi Heavy Industries and Kawasaki Heavy Industries, which manufacture the Soryu-class subs.

Still, don’t expect to see India’s Navy operating Japanese subs anytime soon. India isn’t expected to tender a winner for two years, and it will be at least another 7-8 years after that before the first subs start rolling off the assembly line. Given India’s notoriously cumbersome defense acquisition bureaucracy, these timetables should be viewed as the best case scenario.