“It Looked Like it Was His Insides Coming Out." First Dog to Test Positive for Coronavirus in U.S. Dies 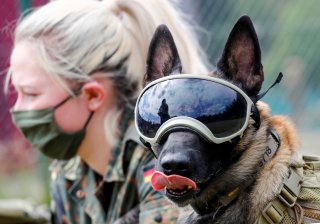 A seven-year-old German shepherd from Staten Island, New York—the first dog to test positive for COVID-19 in the U.S.—has died after a three-month-long illness, according to National Geographic.

The dog, named “Buddy,” started to experience breathing issues beginning in mid-April, which was about the time when his owner, Robert Mahoney, contracted the virus.

According to two veterinarians who reviewed Buddy’s medical records, it’s unclear whether the dog died from complications of the coronavirus or from cancer, which he likely had.

“It’s unclear whether cancer made him more susceptible to contracting the coronavirus, or if the virus made him ill, or if it was just a case of coincidental timing,” National Geographic reported.

In mid-May, the Mahoney family finally found a veterinarian who would test Buddy for the coronavirus. The dog was later confirmed to be infected.

“Samples from the dog were taken after it showed signs of respiratory illness,” the USDA reported at the time. “The dog is expected to make a full recovery.”

Buddy’s health, however, continued to deteriorate to the point he was vomiting clotted blood.

“It looked like it was his insides coming out. He had it all over. It was coming from his nose and mouth,” Allison Mahoney told National Geographic.

“We knew there was nothing that could be done for him from there. What are you going to do for a dog with this? But he had the will to live. He didn't want to go.”

The Mahoney family eventually made the difficult decision to euthanize Buddy.

“(Buddy) was the love of our lives. … He brought joy to everybody. I can’t wrap my head around it,” Allison Mahoney said.

More than 20 dogs and cats have been confirmed to be infected with coronavirus in the U.S., according to the USDA.

However, “based on the limited information available to date, the risk of animals spreading COVID-19 to people is considered to be low,” the CDC stated.

The agency is recommending that people prevent their pets from interacting with people or animals outside their homes. If they are outside, the pets should maintain at least a six-foot distance.