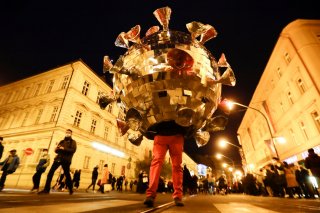 In a rush to pass immediate federal relief when the coronavirus first struck the United States in March, Congress passed a massive spending measure that pumped aid into the economy to combat the financial turmoil from the impacts of the pandemic—a legislation that created a “benefit cliff” that could result in about twelve million Americans losing unemployment insurance by the year’s end, according to a report released Wednesday.

The report, conducted by The Century Foundation, a public policy research group, revealed that those workers enrolled in key programs from the Cares Act in March—including Pandemic Unemployment Assistance (PUA) and Pandemic Emergency Unemployment Compensation (PEUC)—will see a cutoff in their jobless benefits on Dec. 26. Another 4.4 million workers, according to the report, will have already exhausted their benefits prior to this deadline.

“We can’t have twelve million Americans lose their last source of income at a time when the pandemic is raging. [The] unemployment situation is still so dire,” Andrew Stettner, a contributor to the report and senior fellow at the foundation, said in an interview.

It’s also estimated that 7.3 million Americans will see their PUA benefits halted the day after Christmas, a program created for gig and self-employed workers who aren’t normally eligible for regular benefits, and another 4.6 million workers on PEUC, the jobless insurance extension provided for those who have used up their regular benefits after about twenty-six weeks that most states offer, will see the aid expire.

“I hope our report serves as a wake-up call for Congress,” Elizabeth Pancotti, a contributor to the report and policy advisor at Employ America, a left-leaning think tank, said via email. “Millions of American families will be left out in the cold the morning after Christmas if these benefits expire.”

Stettner echoed Pancotti’s remarks, emphasizing that it’s “unacceptable” and is an “issue that must be dealt with” by Congress.

An additional 945,000 enrolled in PUA and 3.5 million on PEUC insurance will see their jobless benefits expire before the December cutoff.

Nearly 2.9 million Americans, however, who will see their PEUC benefits expire will be able to collect some form of state-level extended jobless insurance in the new year. But if an Extended Benefit program is not available in a workers’ state, “they will be eligible for nothing after the expiration of the Cares Act programs,” Pancotti noted.

“Because of the way it works with most people first getting on unemployment in the spring or the summer, you only get a limited amount of time. So even if people are still unemployed . . . they’ve already run out of their state benefits, and now they’re on one of these federal programs, and those are going to run out too,” Stettner said. “They’re going to be cut off.”

Negotiations for another stimulus bill have remained inconclusive, as Senate Majority Leader Mitch McConnell (R-Ky.) and House Speaker Nancy Pelosi (D-Calif.) haven’t been able to strike a deal. While McConnell has proposed a targeted bill that focuses on a few sectors of the economy like small businesses and unemployment insurance, Pelosi has rejected the ideas, advocating for a bill that covers all industries.

The two haven’t convened to contest the next legislation for several weeks.

“I think it’s important to highlight that these benefit cliffs are optional, Congress could tie extended unemployment benefits to labor market conditions. Our findings underscore the harmful effects of arbitrary policy expiration dates on millions of American workers, their families, and the broader macroeconomic recovery. UI benefit extensions and expansions should be in place until labor markets have recovered, and that certainly won’t be by December twenty-sixth,” Pancotti said.

Unemployment insurance has been a topic of debate between McConnell and Pelosi, as the speaker and top Democrats have argued for an extension of the $600 per week in jobless benefits that was established in the Cares Act. Senate Republicans, however, think the amount should be lowered.

Stettner urged that Congress must “work together and come up with whatever package that they need to in terms—stimulus package, a true pandemic relief bill, whatever they’re able to come up with. This is a must-do, end of the year item. Congress has lots of must do’s, and this needs to be treated as a must-do.”