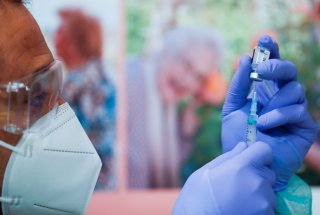 Aldi has become the latest company to offer its employees a financial incentive to get a potentially life-saving coronavirus vaccine.

The grocery chain announced that it would cover all costs associated with vaccine administration and provide hourly workers with two hours of extra pay for each dose they receive, which can reach up to a total of four hours. The company added that it would also work with salaried employees who want to get inoculated.

“The company is working closely with state and local officials across the U.S. to ensure frontline workers remain prioritized, and today Aldi unveiled its plan to support employees,” the company, which has more than two thousand stores across thirty-six states and employs more than twenty-five thousand people, said in a news release.

“Aldi is ensuring that all hourly workers who wish to receive the vaccine are able to do so without concern about losing pay or taking time away from work.”

Aldi is also exploring the possibility of on-site vaccination clinics at its warehouse and office locations to make it easier for its employees to get the shots.

“Providing accommodations so employees can receive this critical vaccine is one more way we can support them and eliminate the need to choose between earning their wages and protecting their well-being,” Jason Hart, the chief executive officer of Aldi in the United States said in a statement.

Just last week, three other companies—Dollar General, Trader Joe’s, and Instacart—also announced plans to pay their employees if they get the shots.

Trader Joe’s said that it would give its workers two hours of pay per vaccine dose and allow for scheduling that works around vaccination appointments.

Meanwhile, Dollar General confirmed that it would give hourly team members a one-time payment of four hours of regular pay after receiving both doses of the vaccine. In addition, salaried workers would receive “additional store labor hours to accommodate their time away from the store.”

And Instacart said that starting February 1, the company’s shift leads, in-store shoppers, and full-service shoppers in both the United States and Canada would receive a $25 stipend after getting inoculated.

“Since the start of the pandemic, the health and safety of the entire Instacart community has been our top priority,” Apoorva Mehta, the chief executive officer of  Instacart, said in a statement.

“With COVID-19 cases continuing to rise across the country, we’re taking proactive steps to advocate that government agencies recognize Instacart shoppers as critical essential workers who deserve early access to vaccines. . . . Instacart shoppers don’t have to choose between earning income as an essential service provider or getting vaccinated.”

In another example of attaching pay incentives to getting vaccinated, Rep. Steve Stivers (R-Ohio) admitted that he would be willing to green-light $1,400 stimulus checks to people who receive the shot.

“It’s so important that we build herd immunity as soon as we can. While I am not for giving a $1,400 stimulus check for anything, I’d be willing to sign off on a stimulus check of $1,400 for people who take the vaccine,” he said Thursday in an interview on Yahoo Finance Live.