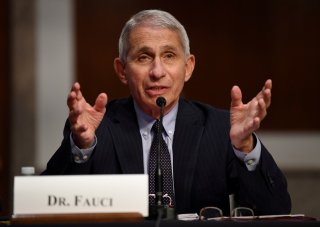 Dr. Anthony Fauci, the country’s top infectious disease expert, has suggested that the current nationwide surge in novel coronavirus cases is due to the United States not shutting down completely during its initial response to the contagion.

Early in the outbreak, U.S. COVID-19 cases peaked at about 30,000 new cases per day, before falling and plateauing at roughly 20,000 new cases a day, according to data compiled by Johns Hopkins University.

“We did not shut down entirely and that’s the reason why we went up,” Fauci said during a virtual conversation hosted by Stanford Medicine.

The U.S. has reported more than 3.3 million coronavirus cases and at least 135,000 deaths, according to Johns Hopkins data. The seven-day average of U.S. cases is more than 59,000, and in nearly 40 states, cases are estimated to be rising by 5% or higher.

Fauci, director of the National Institute of Allergy and Infectious Diseases and a member of the Trump administration’s virus response team, admitted that the government’s initial guidelines for phased re-openings have fallen far short and urged caution as states move forward.

“We made a set of guidelines a few months ago … unfortunately, it did not work very well for us,” Fauci said. “We can get a handle on that. I am really confident we can if we step back.”

Fauci also called on young people to recognize their “societal responsibility” in preventing the spread of COVID-19.

“We’ve got to convince them that just because they get infected and the likelihood is that they’re not going to get seriously ill, doesn’t mean that their infection is not a very important part of the propagation of the outbreak,” he said.

The discussion came on the heels of White House officials releasing a list of “concerning” and “wrong” statements made by Fauci since the start of the COVID-19 pandemic. Last week, President Donald Trump, who has previously noted that the pandemic was nearing its end, also criticized the infectious disease expert.

“Dr. Fauci’s a nice man, but he’s made a lot of mistakes,” Trump said in an interview with Fox News.