Anthony Fauci: There’s ‘a Degree’ of Airborne Spread of Coronavirus 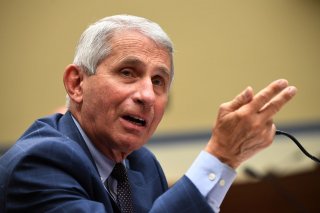 White House coronavirus advisor Dr. Anthony Fauci, the nation’s top infectious disease expert, has said that he believes there is, in fact, “a degree” of airborne spread of the coronavirus.

“I think that there certainly is a degree of aerosolization,” the seventy-nine-year-old director of the National Institute of Allergy and Infectious Diseases said during an interview with the Journal of the American Medical Association on Monday.

“But I’m going to take a step back and make sure that we learn the facts before we start talking about it.”

Most health experts, including those at the World Health Organization and the U.S. Centers for Disease Control and Prevention, initially said that individuals need to worry chiefly about two types of transmission: inhaling respiratory droplets from an infected person nearby and touching a contaminated surface and then your eyes, nose or mouth.

In July, the WHO decided to publish new guidance that acknowledged it could not rule out the possibility the coronavirus could be transmitted through airborne particles in indoor spaces.

According to the agency, airborne transmission is different from droplet transmission. Airborne transmission refers to the presence of extremely small particles that can remain in the air for long periods of time and has the potential to be transmitted to others over distances greater than one meter.

Fauci admitted that it has become “much clearer” that individuals are likely at greater risk of infection if they’re in poorly ventilated rooms, buses, planes and other confined spaces.

“We need to pay a little bit more attention now to the recirculation of air indoors, which tells you that mask-wearing indoors when you’re in a situation like that is something that is as important as wearing masks when you’re outside dealing with individuals who you don’t know where they came from or who they are,” Fauci said.

“It’s something we’re learning more and more about. We’ve got to make sure that we’re humble enough to accumulate new knowledge and use it as we get it.”

There are now more than 18.3 million confirmed cases of coronavirus worldwide, including at least 695,000 deaths, according to the latest data from Johns Hopkins University.

The United States has the most cases by far, with nearly 4.7 million confirmed infections and more than 155,000 deaths.