Bill Gates: This Is When You Can Take Off Your Coronavirus Masks 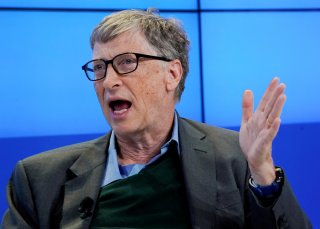 There is a rising hope that public health measures like face masks will be eased in the coming months if new coronavirus cases continue to decline.

But billionaire philanthropist Bill Gates believes that there is still much work to be done before Americans can return to their normal lives.

“It’s only by late spring or summer that we’re going to get to numbers where you can look at changing your behavior in a significant way,” the sixty-five-year-old Microsoft co-founder said recently in an interview on the social media app Clubhouse.

Gates, who has been warning about the threat of a global pandemic since 2015, noted that he plans to wear face masks throughout the fall until infection rates drop significantly.

“I want to set a good example. If you’re vaccinated, you can still transmit,” he said, adding that mask-wearing on a daily basis “isn’t some huge disastrous thing.”

According to the U.S. Centers for Disease Control and Prevention, those who are fully vaccinated for COVID-19 still need to continue to adhere to public health safety guidelines.

“I’m not going to stop wearing masks or being careful, particularly around older people who haven’t been vaccinated,” Gates said.

Last fall, during the release of the Bill and Melinda Gates Foundation’s annual Goalkeepers Report, which measures progress made toward the United Nation’s Sustainable Development Goals, he asserted that the United States missed an important opportunity by not mandating mask-wearing earlier.

“The number of things that, in retrospect, could have been done better on this pandemic is very, very large,” he said. “Even the medical community are understanding of the importance of masks. You know, it took us several months—most respiratory diseases are coughing diseases. They’re not talking or singing diseases. And so we got that one wrong. We underestimated the value of masks.”

White House chief medical advisor Dr. Anthony Fauci, however, is less optimistic regarding pandemic-weary Americans being able to discard their masks by this summer. He has projected that the United States will be “approaching a degree of normality” by the end of this year, but that many people may still be wearing face masks and coverings well into 2022.

“You know, I think it is possible that that’s the case (that Americans will be wearing masks in 2022) and, again, it really depends on what you mean by normality,” the nation’s top infectious disease expert recently said on CNN’s State of the Union.

Fauci added that he believes that by the end of 2021, “we’re going to have a significant degree of normality beyond the terrible burden that all of us have been through over the last year. As we get into the fall and the winter, by the end of the year, I agree with (President Joe Biden) completely that we will be approaching a degree of normality.”