To Bounce Back From the Coronavirus, America Must Continue to Deregulate 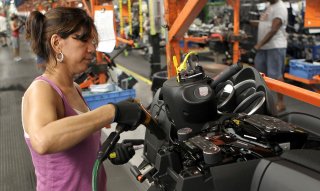 Recently, President Trump signed an executive order instructing federal agencies “to use any and all authority to waive, suspend and eliminate unnecessary regulations that impede economic recovery.” It’s the latest evidence that the cornavirus pandemic has been a sort of curate’s egg when it comes to state power: In a Jekyll and Hyde-ian way, government is growing bigger and smaller at the same time.

On one hand, we’ve never seen the federal government spend money at such an alarming rate—bailing out companies and providing many citizens with financial assistance. Last month’s Coronavirus Aid, Relief, and Economic Security (CARES) Act was the largest aid package in the history of the United States, and it also gave the Federal Reserve unprecedented powers to lend to non-bank businesses.

On the other hand, we are living through one of the most sweeping deregulatory periods in recent history, with rules and regulations being shed at an astonishing pace. From occupational licensing and scope of practice regulations to alcohol takeout and delivery laws, government-imposed restrictions are rapidly falling by the wayside as policymakers try to mitigate the harm caused by this pandemic.

Most people are familiar with the concept of government growing during times of emergency, but could the coronavirus pandemic actually bring about real reductions in the size and scope of government power?

In “Crisis and Leviathan: Critical Episodes in the Growth of American Government,” Robert Higgs discussed what he referred to as the ratchet effect. Using historical examples, he showed that government tends to expand and grow during times of crisis but often does not retract to its pre-crisis position once the emergency has ended. Government officials use the fear and panic as an opportunity to enact sweeping legislation and are usually hostile to rolling it back. As a result, times of emergency leave us with a variety of new government programs and policies. State power is ratcheted up.

For example, in the wake of the 9/11 terrorist attacks, there was a massive ratcheting up of government programs and power. New bureaucracies were spawned, wars were started, police forces became more militarized, foreign and domestic surveillance efforts were expanded, travel became more tightly regulated, and civil liberties were all but ignored. Government grew across the board.

But the coronavirus crisis hasn’t exactly followed this same script. To be sure, there have been calls for significant government intervention and expansion of public power to help mitigate some of the worst consequences that could result from the coronavirus.

However, it’s hard to ignore the meaningful examples of government contraction and targeted deregulation.

“Throughout history, national emergencies have led to a more powerful and centralized federal government and to the transfer of federal power from Congress to the executive branch,” notes Hudson Institute fellow Christopher DeMuth. “This time, the federal response rests largely on state and local government and private enterprise, with a wave of deregulation clearing the way. The Trump administration has seized no new powers, and Congress has stayed energetically in the game.”

Stephen Harper, former prime minister of Canada, argues that while many people are looking to government to help in the midst of the current crisis, “as needs shift to jobs, growth and wealth creation—and those needs will be enormous—it will require more market activity and a bigger private sector, not more intervention and bigger government.”

Harper also notes that we should “expect a shift to less government” because “[p]ublic-sector balance sheets will be an unholy mess” in the wake of COVID-related bailouts. There’s only so much money governments can burn through before a debt crisis has serious economic consequences. That makes innovative dynamism and economic growth all the more important.

This should not be all that surprising. “Our regulatory state is failing us,” argues our Mercatus Center colleague Tyler Cowen. “There are regulations so bizarre that if put in a novel no one would believe them,” says another of our colleagues, Scott Sumner. The coronavirus crisis has been a stress test for our institutions, and many of them have failed it miserably. America’s regulatory systems have become utterly dysfunctional and out-of-touch with common sense. Had policymakers cleaned up old messes through periodic spring cleanings earlier, then perhaps we wouldn’t be here.

Of course, unnecessary and outdated regulations often stay on the books far longer than they should. While it should not take a pandemic for our institutions to engage in meaningful self-review, that’s where we find ourselves.

The window is now open to serious regulatory reform. One would be to study all the regulations that governments suspended during the pandemic and then propose a major bill to reform or sunset them together as a package—a “fresh start.” This would lock in many of the deregulatory measures that have been adopted, while still allowing legislatures and regulators to reenact some policies they feel are necessary ex-post.

Another option would be for governors and heads of administrative agencies to take the lead. While they could not repeal laws enacted by a legislature, they could turn back a number of outdated or ineffective regulations and could use their enforcement discretion to reprioritize which areas they focus their time and resources on.

Finally, jurisdictions could create a BRAC-style commission to examine the restrictions that have been eased in the wake of this pandemic and sort out which laws and regulations should be kept, and which should be shed.

Adam Thierer is a senior research fellow and Trace Mitchell is a research associate with the Mercatus Center at George Mason University.