Can Coronavirus Survive on Salmon? A New Study Says Yes. 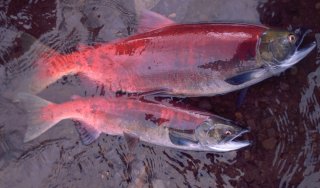 A new Chinese study has found that the coronavirus can linger on chilled salmon for more than a week, which has the potential to spread the contagion to other humans.

The research, which has not yet been published or peer-reviewed, revealed that SARS-CoV-2, the virus that causes the coronavirus, collected from salmon samples could survive for eight days at 39 degrees Fahrenheit—roughly the temperature that is most often used when transporting fish overseas.

“SARS-CoV-2-contaminated fish from one country can be easily transported to another country within one week, thus serving as one of the sources for international transmission,” said the researchers, who are from South China Agricultural University and Guangdong Academy of Agricultural Sciences.

“Different from vegetables and other food, fish have to be transported, stored and sold under a low-temperature environment. Fish are generally sold in quarters having temperatures much lower than regular room temperature. This means that virus attached on fish skin and sold in fish or seafood markets can survive for a long time.”

After discovering traces of the virus on packaging and food on several occasions, Chinese authorities have placed a renewed focus on investigating imported meat, packaging, and containers as a potential source of the coronavirus.

As of Monday, China had paused imports from fifty-six companies in nineteen countries after employees there were infected with the coronavirus.

This particular study comes after the virus was found to be able to survive for up to three weeks on frozen meat and fish, according to research posted on BioRxiv.

The researchers pinpointed the presence of the virus—not just the genetic material—on meat that was previously refrigerated and frozen for roughly twenty-one days and later thawed.

Last month, there were reports out of Shenzhen, China, that the novel coronavirus was found on the surface of frozen chicken wings imported from Brazil over a span of four days.

In response, the Shenzhen Municipal Health Commission stated that it traced and tested everyone who may have come into contact with the affected food products, and all results came back negative.

The World Health Organization, however, quickly reassured the public that the contagion likely does not spread in such a manner.

“There is no evidence to date of viruses that cause respiratory illnesses being transmitted via food or food packaging,” the WHO stated.

“Coronaviruses cannot multiply in food—they need an animal or human host to multiply.”

Dr. Mike Ryan, executive director of the WHO Health Emergencies Programme, added: “There is no evidence that food or the food chain is participating in the transmission of this virus. People should not fear food, or food packaging or processing or delivery of food.”

According to the agency, Chinese health officials tested a “few hundred thousand” samples of frozen food and found that “very, very few” tests came back positive.