Can Dogs Get Coronavirus? The Answer Seems Like a 'Yes'. 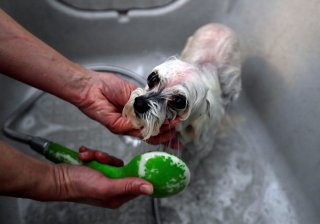 It's bad enough that coronavirus is killing people all over the world, with the death toll in the U.S. creeping toward the 50,000 mark. But now animals are getting the disease as well.

Eight big cats at the Bronx Zoo in New York have tested positive for coronavirus, with two pet cats, also in New York, this week confirmed as the first pets in the U.S. diagnosed with the disease.

But what about dogs?

According to a question and answer page posted by the World Organization For Animal Health, which was last updated on April 21, "several dogs and cats (domestic cats and a tiger) have tested positive to COVID-19 virus following close contact with infected humans." The document also says that "dogs appear to be susceptible to infection but appear to be less affected than ferrets or cats," and that current studies are looking into pets’ susceptibility to the disease.

The Government of the Hong Kong Special Administrative Region announced in late March that two dogs in the region had tested positive for coronavirus. The government also announced at the same time that such infections of dogs appeared to be infrequent, and such animals do not appear to play a major role in spreading the virus.

There do not appear to have been any news reports in the United States of dogs being diagnosed with coronavirus.

Nature published a story April 1, citing research from the Harbin Veterinary Research Institute in China, stating that "dogs are not really susceptible to the infection." The researchers inoculated five young dogs with the coronavirus, and found that "two excreted viral RNA in their [feces], but none contained infectious virus."

The CDC's guidelines, which acknowledge that "a small number" of dogs and cats have been diagnosed with the virus, advises pet owners to "treat pets as you would other human family members — do not let pets interact with people or animals outside the household. If a person inside the household becomes sick, isolate that person from everyone else, including pets.”

Speaking of coronavirus and dogs, it was reported this week that Brian Harrison, who is the chief of staff to Department of Health and Human Services Secretary Alex Azar, spent several years running a dog-breeding business, where he specialized in the breeding of Labradoodles.

Harrison, per a Reuters report, has been derisively referred to as “the dog breeder" by some White House officials. He did previously serve as a staffer in the Department of Health and Human Services and other parts of the government during the George W. Bush Administration, and also did some lobbying in the health care sector while he was out of government.