The Case for Selfishness with Stimulus Checks 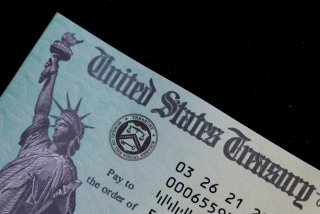 The idea behind the stimulus checks that have passed since the start of the pandemic, including two in 2020 and one in 2021, is that putting cash directly in the hands of Americans will get them to spend that money, and therefore help the economy. In addition, the checks and other aid passed as part of the packages is meant to prevent hardship and make people's lives better- and there are indications that this has succeeded.

The stimulus packages do not contain any restrictions on what people receiving them can do with the money. Once the checks come in, the money belongs to Americans, who can do whatever they choose with that money. In the meantime, many people are ingrained to see government funds as “taxpayer money,” and for certain uses of that money as a “waste” of it.

A column published this week says that’s a good thing.

The editorial board of the Pittsburgh Post-Gazette published an editorial on Wednesday that said: “some selfish spending of stimulus funds could lift spirits and the economy at the same time.”

The newspaper noted that, according to a Federal Reserve survey, many Americans saved the money from their stimulus checks.

“In light of the tumult of recent years, saving is a perfectly logical strategy. Paying off debt generally earns a thumbs up from financial advisors,” the Pittsburgh Post-Gazette editorial board wrote. “However, as the economy continues to heat up, spending some of those funds would inject the cash back into the market and could help brighten moods after a particularly difficult year for the country.”

The editorial also noted that now that the pandemic is ending, now might be the ideal time to spend.

“These aren’t typical times,” it stated. “Many citizens have remained trapped indoors in the last year either from fear of contracting the coronavirus or due to government-imposed lockdowns. Now that those rules are lifting and vaccines are widely available, it’s more than alright to drop some cash on a special treat or trip or something fun, especially for those who didn’t lose work during the lockdowns.”

While noting that those who need to save money at the current moment absolutely should do so, those who can afford to spend money might see the present moment as the perfect time to do so.

“Those who can afford to treat themselves, should do so,” the editorial said. “And they should also keep their neighbors and the less fortunate in mind moving forward. Giving to organizations that serve those in need would be a noble thing, indeed, and such generosity can often provide a more rewarding rush than spending for personal pleasure. Churches, social service agencies and charities are all organizations deserving of support as they work to make sure neighbors don’t fall through the cracks.”