CDC: Coronavirus Can Be Under Control in 12 Weeks if People Wear Masks, Social Distance 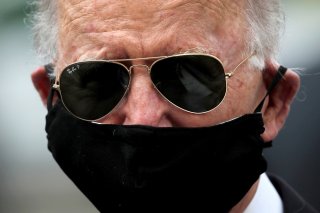 If most Americans decided to fully adhere to current public-health guidelines—such as wearing face masks and coverings and practicing social distancing—the United States could get the coronavirus pandemic under control in just twelve weeks, according to the director of the Centers for Disease Control and Prevention.

“It’s in our hands, within our grasp,” CDC chief Robert Redfield told reporters Friday on a conference call.

“But it is going to require all of us to embrace these mitigation steps. And we’re going to need to do that four, six, eight, ten, twelve weeks and then we will see this outbreak under control.”

Redfield noted that for this to work, at least 90% of citizens need to follow the guidelines.

“I think we’re seeing progress over the last four weeks, I hope that progress will continue, but I think none of us should turn away from the recognition that it’s key each of us recognize we want to make sure COVID stops with us,” he said.

The United States reported more than 44,000 new cases of the coronavirus on Thursday—an 11% drop in the seven-day average compared to the week prior, according to data from Johns Hopkins University.

Redfield said Thursday that the number of coronavirus-related deaths will likely sink over the next week.

According to the CDC’s website, the agency expects the rate of deaths to drop in Arizona, Florida, Mississippi, and South Carolina over the next month, while forecasting more deaths in Minnesota.

In total, the United States has nearly 5.7 million confirmed infections and more than 175,000 related deaths.

During the conference call, Redfield also urged parents to get their children vaccinated for influenza, as health officials and doctors have been warning that a devastating one-two punch of the seasonal flu plus the pandemic has the potential to overwhelm the U.S. health-care system.

On average, between nine and forty-five million Americans catch the flu each year, which leads to anywhere between 12,000 to 61,000 deaths. According to the CDC, between October 2019 and April 2020, there were an estimated thirty-nine to fifty-six million influenza infections and 24,000 to 62,000 fatalities.

Despite the risks, Redfield, who noted that he has eleven grandchildren, supports the reopening of schools.

“I think the most important thing in all school reopenings is that in order for them to reopen and stay open we have to have confidence in teachers and parents it’s safe for them to return,” he said.

“I have great confidence my grandchildren can go back to school and do this in a safe and sensible way.”

Globally, there are more than 22.8 million confirmed coronavirus cases and at least 796,000 deaths.