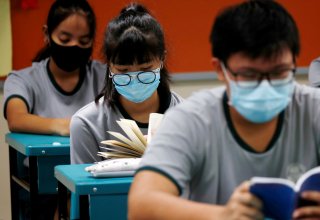 Children in general aren’t likely to die from the novel coronavirus, but the mortality risk is still relatively high for children and teens from minority groups, according to a new report released by the U.S. Centers for Disease Control and Prevention.

Among the 190,000 confirmed coronavirus-related deaths in the United States, only 121, or 0.08 percent, were reported in those under twenty-one. The most updated CDC report has revealed that roughly 380 children, teenagers, and young adults aged up to twenty-four have died from the virus.

The researchers noted that among the 6.5 million coronavirus cases in the country, 391,814 infections were identified to be individuals under twenty-one. Although those under twenty-one make up 26 percent of the population, they’re responsible for only 8 percent of all reported cases.

Ethnic and racial minority groups were found to be disproportionately affected. Forty-four percent of the 121 who have died from the virus were Hispanic, 29 percent were Black, 4 percent were American Indian/Alaska Natives, and 4 percent were Asian-American or Pacific Islander.

These groups represent 41 percent of the U.S. population under age twenty-one, but they account for about 75 percent of all fatalities in that age range. White children made up 14 percent of the deaths.

“Infants, children, adolescents, and young adults, particularly those from racial and ethnic minority groups at higher risk, those with underlying medical conditions, and their caregivers, need clear, consistent, and developmentally, linguistically, and culturally appropriate COVID-19 prevention messages,” the researchers wrote.

“Although infants, children, and adolescents are more likely to have milder COVID-19 illness than are adults, complications, including MIS-C and respiratory failure, do occur in these populations. Persons infected with or exposed to SARS-CoV-2 should be followed closely so that clinical deterioration can be detected early,” the researchers wrote.

MIS-C, or multisystem inflammatory syndrome in children, is a condition in which different body parts can become inflamed, including the heart, lungs, kidneys, brain, skin, eyes, and gastrointestinal organs, according to the CDC.

Recently released data has revealed that more than 500,000 children in the United States have already tested positive for the novel coronavirus since the pandemic started, according to the American Academy of Pediatrics and the Children’s Hospital Association.

That number seems to be trending upward, as 70,630 new child cases were registered from August 20 through September 3—a 16-percent increase over the span of two weeks.

Now more than eight months into the pandemic, there are roughly thirty million confirmed cases of coronavirus worldwide, including at least 943,000 related deaths, according to the latest data from Johns Hopkins University.