CDC Journal: Woman May Have Been Infected With Coronavirus in Airplane Restroom 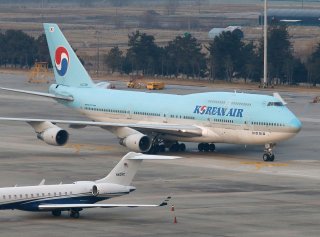 There now appears to be evidence that a woman contracted the novel coronavirus in a restroom on an airplane, according to researchers from Soonchunhyang University College of Medicine in Seoul, South Korea.

The study, published in the U.S. Centers for Disease Control and Prevention’s journal Emerging Infectious Diseases, said the twenty-eight-year-old woman was among 310 passengers on an evacuation flight amid the coronavirus outbreak from Milan, Italy, to Incheon, South Korea, on March 10.

“On the flight from Milan, Italy, to South Korea, she wore an N95 mask, except when she used a toilet,” the study’s authors wrote.

The researchers noted that eleven individuals who exhibited coronavirus symptoms were removed from the flight, while 299 other passengers were permitted to board the eleven-hour flight.

After landing in Korea, all passengers and crew members were immediately quarantined. Six asymptomatic passengers later tested positive for the coronavirus.

The woman developed coronavirus symptoms eight days after she got home and was eventually hospitalized, the study said.

“Given that she did not go outside and had self-quarantined for three weeks alone at her home in Italy before the flight and did not use public transportation to get to the airport, it is highly likely that her infection was transmitted in the flight via indirect contact with an asymptomatic patient,” the researchers wrote.

There has been, however, little further evidence to support that passengers are at high risk of contracting the coronavirus on flights.

In one particular case, 328 passengers and crew members were tested for the coronavirus after it was revealed that a March 31 flight from the United States to Taiwan had been carrying twelve passengers who were exhibiting coronavirus symptoms.

Moreover, most planes now feature air filters that are designed to trap 99.99% of particles, face masks and coverings are mandatory, and there are more thorough cabin cleanings after each flight.

There are now more than 24.5 million confirmed cases of coronavirus worldwide, including at least 833,000 deaths, according to the latest data from Johns Hopkins University.