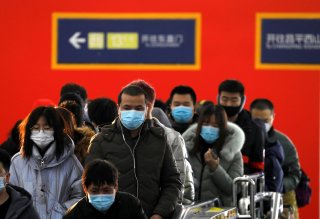 The Chinese city of Xi’an, the capital of central Shaanxi province, has been locked down after a spike of Omicron cases was detected there last week. The restrictions were tightened on Monday.

Residents of Xi’an are forbidden from driving cars in an attempt to contain the spread of the coronavirus among other things.

In the run-up to the 2022 Winter Olympics in Beijing, China has redoubled its “zero-COVID” strategy, virtually eradicating the disease within the country through long quarantine periods, a rigorous border inspection regime, and harsh lockdown measures on affected areas. Xi’an, where residents have been confined for nearly a week, is an enormous city with a metropolitan area of twelve million residents, comparable in size to greater Los Angeles.

The flare-up in coronavirus cases in Shaanxi has led to two hundred new infections, the highest number since China largely contained the virus within its own borders in March 2020. Xi’an is at the center of the new outbreak, but two other cities have reported cases as well. Unusually, the outbreak is largely composed of cases of the “delta variant” rather than the more recent Omicron variant, which has surpassed delta in caseload in both the United States and Britain.

A Chinese state-run social media account claimed that vehicles within Xi’an would not be allowed on the road unless they were assisting with disease control work. Drivers caught violating the order would face ten days’ imprisonment and a fine of 500 yuan ($80), and police would “strictly inspect” cars, according to the social media account.

The authorities in Xi’an have also launched a mass testing campaign and placed thirty thousand city residents into hotels for quarantine. Families in the city have been confined to their residences, with one member of each family allowed to leave to buy groceries and other needed items every three days.

Authorities also forbade migrant workers in the city, many of whom come from families in the countryside, from returning home for the upcoming Chinese New Year.