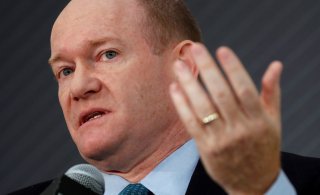 Sen. Chris Coons (D-Del.) said that nationwide vote-by-mail “is not and should not be a partisan issue” in the face of a pandemic at a Tuesday press call.

Democratic leaders have called for expanding the mail-in ballot by the general election in November to avoid the spread of the novel coronavirus at polling stations across the country, but Republican leaders, including President Donald Trump, say that vote-by-mail is a security risk and an opportunity for fraud.

Coons and Sen. Amy Klobuchar (D-Minn.) portrayed the issue as a battle between grassroots Republicans and Democrats on one side and the national Republican leadership on the other as they made the case at a Center for American Progress conference call.

“Senator McConnell and some of the republicans have not been helpful and have not been listening to some of the Republican governors” who have transitioned to mail-in voting, Klobuchar said, referring to Senate Majority Leader Mitch McConnell (R-Ky.).

Republican governors in Massachusetts, Idaho, Maryland, Ohio, and Nebraska have all either transitioned to a mail-in election or asked state residents to vote by mail voluntarily.

Support for mail-in voting tends to fall along partisan lines in polling, although a majority of Americans overall support it.

Coons said that national Republicans have a history of opposing federal support for elections, which should be bipartisan but have long been a “contentious issue.”

“In every instance, it’s been a fight,” he told reporters. “I have concerns about whether we’ll see a real sense of Republican urgency.”

“If it had not been on the shortlist of items that we are fighting for, we should not have gotten a dime” in previous negotiations, Coons added.

Klobuchar also called for changing “antiquated laws” on the state level making it difficult to acquire a mail-in ballot, and for expanding early voting to spread out in-person votes over a longer period of time.

Gov. Tony Evers (D) had tried to transition to an entirely vote-by-mail election, but the Republican-controlled state legislature blocked his move, and the courts allowed in-person voting to move forward on April 7.

Thousands of poll workers excused themselves from work due to the risk of contracting the coronavirus, leading to long lines across the state.

Neera Tandan, president of the Center for American Progress, said that Wisconsin is “still paying the price dearly.”

State health authorities have linked at least fifty-two coronavirus cases to the election.

Republicans leaders in Wisconsin say that this number of cases is far below the nightmare scenario predicted by Democrats, and national Republicans are pushing back against nationwide vote-by-mail.

“Mail ballots are very dangerous for this country because of cheaters,” Trump said on April 7. “They are fraudulent in many cases.”

But Klobuchar pointed out that Trump himself has the right as President to vote by mail from the White House.

“While those voters [in Wisconsin] were standing in their garbage bags and homemade masks, the President of the United States could vote from the comfort of 1600 Pennsylvania Avenue.”

This article initially stated that the press call took place on Monday. It has been updated with the correct date.