Coronavirus: 13 Experts Gave Us Their 2021 Predictions 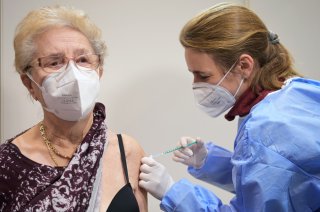 As each month passes amid this ongoing coronavirus pandemic, the daily number of infections has continued to march in one direction only—steadily upward.

In the latest rolling seven-day period, the United States is averaging about 215,000 new cases per day, according to data compiled by the U.S. Centers for Disease Control and Prevention. Last Saturday, a grim new record was set when nearly 300,000 new cases were reported, and the cumulative death toll surpassed more than 350,000 on the same day.

To date, according to Johns Hopkins University, the United States has witnessed roughly twenty-one million cases over the past eleven months—by far the highest in the world.

Even with these bleak figures, there appears to be darker days ahead. A more contagious coronavirus variant—known as B.1.1.7 and first identified in the United Kingdom—continues to crop up across the United States and around the globe, threatening to further strain hospitals just as vaccines are rolling out worldwide.

Currently, at least four U.S. states and thirty-three countries have identified the new variant, which has been reported to be between 50 percent and 70 percent more transmissible. Several more nations have identified an additional variant, first seen in South Africa, that also appears to be more contagious.

Moreover, U.S. air travel hit its highest level since mid-March over the past weekend, with more than a million people passing daily through airport security checkpoints, according to the Transportation Security Administration. Health officials and medical experts already have sounded the alarm that this likely sets the stage for another post-holiday surge in coronavirus cases.

In order to shed more light on what to expect in the coming months, the National Interest reached out to more than a dozen medical experts across the United States to get their personal opinions. Here is what they had to say.

“Until we have (more vaccinations) or there is some other major change in risk reduction behaviors, I do expect the (infection) numbers to continue to rise. Change would only occur if there is something to interrupt the infection cycle where Person A becomes infected and then spreads it to several more, (then) several more to several more, and on and on. Right now, all we have is for Person A to stay home as much as possible, wear a mask when not around immediate household members, and hope that those around him or her do, too. With a vaccine, (you can) eliminate Person A and an entire transmission cycle is interrupted. Gradually, as more people are immunized, they will be protected as well—even if there is a Person A who is unmasked and infectious. I don’t think there is a maximum number we could reach, and that has been borne out by the number of times we keep raising that ceiling number.”

“I am afraid we will continue to see cases rise until at least 75 percent of the U.S. population is immune (by either vaccination or natural infection). Our rollout of vaccines has been very slow in the U.S. It is very important we strictly adhere to mask-wearing in public, avoid indoor gatherings, and unnecessary travel in the U.S. with cases exploding. I don’t know how many more cases we will see since there are so many variables, but if one does the math, we’re now seeing about 1.4 million new cases per week. The newly described variant (originally identified a few weeks ago in the UK) is clearly in the U.S. now, and this variant appears to be more transmissible, so cases may increase even more rapidly.”

Dr. Lee Riley, Professor and Chair of the Division of Infectious Disease and Vaccinology at the University of California, Berkeley

“Between the period just before Thanksgiving and two weeks afterwards, the number of daily cases increased by more than 50,000 in the United States. I would guess that the increase between Christmas and New Year’s holidays and two weeks afterwards will be similar or greater, so we are likely to see anywhere from 250,000 per day to 300,000 per day towards the second half of January.”

“I expect we may see an increase in cases. I think the big events that make this likely are the effects of the Christmas and holiday travel and the effects of increased transmissibility of the UK and/or South African SARS-CoV-2 mutant. Holiday travel may cause cases to rise dramatically because of intermixing of groups outside of their small home-based “bubbles,” that probably happened as millions of people traveled over the holiday period. This travel will undoubtedly lead to (often asymptomatic and pre-symptomatic) persons transmitting to the new folks they encountered, especially when not masked (or) social distanced. . . . The UK mutant has been estimated to transmit 70 percent more efficiently than the previous SARS-CoV-2 strains. That will likely cause more cases per day as it spreads around the country. . . . The University of Washington Institute for Health Metrics and Evaluation (IHME) . . . (has estimated) there are currently 621,000 infections in the U.S., counting those that don’t get tested and reported. IHME mostly predicts the worst-case scenario would occur with mandates easing, and if mandates are eased, they predict the daily infection rate could get to one million per day, peaking in mid-February. I think this is without taking holiday travel and new variants into consideration.”

“This (infection) number will almost certainly rise, and I would be saddened, but not surprised, to see it rise by another 10 to 20 percent in the next couple of weeks. It is hard to predict how high it will get as we begin vaccinating more. Additionally, as people see it hitting closer to home with more friends and families infected, it may motivate them to redouble their efforts at wearing masks, (social-)distancing, etc.”

Dr. Glen P. Mays, Chair and Professor in the Department of Health Systems, Management and Policy in the Colorado School of Public Health at University of Colorado Anschutz

“We are now two months into the fall/winter seasonal surge in cases. Nationally, the case volume has started to flatten out over the past two weeks, suggesting that the stronger control measures implemented in many states and communities may be helping to contain the spread, such as mask requirements and limits on indoor commercial activity and public indoor gatherings. Hopefully, this means that we are at or near the peak in case volume nationally, and we can expect to see declining case volume in the coming weeks and months if we can maintain high levels of compliance with control measures. At least eighteen states are now experiencing declining case volume.”

“I expect this (infection) number to continue to increase in the coming weeks. For most states, (the data indicate) that viral transmission is broadly increasing. Reporting national estimates only has limited utility because each state is fighting its own COVID-19 battle. The U.S. figures then reflect in a rough sense the average win/loss ratio among the fifty states weighted by population. I am unsure how many daily new cases might occur at the peak—however, we are nowhere near herd immunity, so substantial additional increases are possible.”

Dr. Cindy Prins, Clinical Associate Professor of Epidemiology at the University of Florida

“Because this high number of cases has also coincided with multiple holidays and an increase in travel in the U.S., I expect that this number will continue to rise for at least a couple more weeks. I really don’t know what the highest number could or would be though. My hope is that the rise will begin to slow down and then plateau soon as we move away from the holidays, and as more communities reinforce COVID-19 prevention measures in response to the high number of cases.”

“I expect that in the short term, we will continue to see this number rise for two reasons—the holidays when people gathered with people outside of their “bubbles,” which will lead to more infections, and the new variant, which is circulating and is one and a half times as infectious. I do not have an estimate of the highest number that will be reached because that number is also dependent upon testing, which has been inconsistent across the U.S.”

“I expect the number of cases to continue to rise as schools open back up for the spring semester and a new, more contagious form of the virus has been reported in the U.S. It is hard to say how high the daily case count may go as this could be impacted by vaccinations and access to testing and testing supplies. Testing is not mandatory, so daily case counts are not indicative of prevalence of disease in our communities.”

“We will certainly see a rise in infections. This is due to the behaviors we have seen during the last few weeks of 2020 during holiday season. People gathered in groups in their homes and illegally in public spaces. In New York City, bars boarded up windows so that parties could not be detected. About 1.2 million people traveled on planes that have less than ideal mitigation strategies. Also, all the news of the vaccine gave individuals a false sense of security. And the turmoil created by Trump trying to steal the election and derail democracy heightened anxiety of many Americans. And anxiety engenders risk-taking.”

Dr. Pavitra Roychoudhury, Instructor in the Department of Laboratory Medicine and Pathology at the University of Washington

“The case numbers are grim, and I think they likely represent the effects of gatherings over the holidays, since cases lag events, and deaths lag cases. . . . Intuitively, we usually expect numbers to stabilize slightly after the holiday effect has passed. However, this may be complicated by the slower than expected rollout of vaccines as well as the arrival and spread of the (new) variant, which is thought to be more transmissible than other circulating variants. There is . . . potential for an increase in cases if distancing measures are relaxed across the country. The arrival of the variant doesn’t change any of the existing recommendations to limit spread. However, it calls for greater vigilance to monitor and curb its spread.”