Coronavirus Death: Who Is This Plague Targeting? 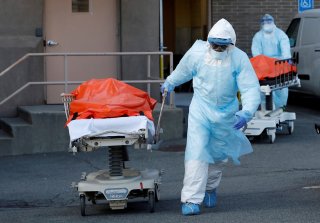 As the U.S. death toll reached 23,000 yesterday at the halfway point in what the U.S. Surgeon General predicted would be “the worst two weeks in most Americans’ lives,” the question is: WHO now faces a significantly increased risk of death as a result of the arrival of this deadly demon? In the picture presented by the White House Task Force on Coronavirus, we are all in this together. As one public health professional put it last week, coronavirus is an “equal opportunity killer.”

Over the past two weeks, the elite press has headlined their own proposed answers to this critical question about the differential impact of this novel killer. According to the New York Times, “Black Americans Bear the Brunt as Deaths Climb.” The Washington Post shouted: “The coronavirus is infecting and killing black Americans at an alarmingly high rate.” And The Wall Street Journal’s weekend headline declared: “Toll in Senior Homes Wider than Reported.”

While each of these answers has a grain of truth, unfortunately, most fail to answer the critical question or do so incorrectly. The White House narrative is part of its effort to mobilize a whole-of-nation campaign in its declared “war on coronavirus.” Attempting to persuade younger Americans to comply with their guidelines about sheltering at home and practicing social distancing, they are messaging: you, too, are at risk. Journalists are struggling to connect to a fast-moving, data-heavy, novel threat. Particularly when most are writing for readers whose eyes glaze over when they see numbers and percentages, they resort to narratives. Not surprisingly, these storylines reflect earlier special interests in particular groups who bore a disproportionate share of the burden of death before this virus appeared.

That the chronically ill in nursing homes and hospitals, black Americans, the poor, and elderly face a greater risk of death than the rest of the population is a well-known fact. BC—before coronavirus appeared—these groups have been dying at higher rates than other Americans for decades.

The question is: What is new about coronavirus? In the world AC—after coronavirus—are we seeing essentially more of the same? Or is coronavirus discriminating in its choice of victims—adding disproportionally to those who already carried the largest burdens?

A report to be released soon from the Harvard Kennedy School’s Belfer Center answers this question directly. To summarize its conclusions in one paragraph:

- Coronavirus is indeed discriminating beyond “normal” risks of deaths in the world BC. It is selecting its victims primarily from the 15% of Americans over 65, preferring in particular the one-third of those who have severe preexisting conditions. While those over 65 had previously been dying at four times the rate of those under 65, AC the risk of death for these individuals has jumped more than 10%.

- This killer’s favorite targets are males. Three of its victims are males for every two females.

- At the other end of the spectrum, this plague has largely passed over the young. How many Americans under 25 have died from coronavirus to date? Fewer than 50. Those 64 and younger account for just 20% of the dead.

- And finally, while the data on racial preference is too limited to draw confident conclusions, the small samples from New York City indicates that this virus is prejudiced against African-Americans—though not as dramatically as the extreme claims being made.

Of course, the picture is more complicated. Life always is. Many of these complexities, together with a battery of relevant numbers, percentages, and footnotes to best sources, are discussed in our report as it attempts to document not just the number of deaths in specific sub-groups of the population but also to estimate the additional burden of risk coronavirus is imposing on these groups. In addition to the data the CDC has seen fit to release, the report also includes evidence from 15 other nations and samples.

The most under-utilized source of clues to what is happening comes from what the report calls “accidental floating labs” like the cruise ship Diamond Princess where 3711 passengers and crew were quarantined at sea for more than three weeks with infected individuals on board. Among the 712 who caught the disease, 12 died—all but one of them over 70.

Which leads to the policy question: So what? Is this just another example of academic gotcha? Or, alternatively, are these findings essential for understanding the shape of the challenge coronavirus poses for our nation?

If—after further analysis and debate—the picture painted by connecting the “dots of light” now available proves to be roughly right, the implications for what governments at all levels—national, state, and city— should now be doing are profound.

To pick one of a score of implications noted in the report: Everyone recognizes the need to give priority in protection to frontline health workers who are testing and treating the infected. But what about the 42 million Americans over 65 who accounted for 73% of the nation’s annual deaths BC but will now make up more than 80% of the dead?  Should these disproportionately vulnerable individuals be working today in supermarkets, takeout restaurants, and gas stations? Or should they be cared for in their homes and apartments—not standing in checkout lines wearing face masks?  On this score, Los Angeles deserves a shout-out for launching a program last week to deliver food to the elderly with preexisting conditions, rather than leaving them to go to grocery stores or food banks for themselves.

Today, President Donald Trump, leaders of his administration, Congress, and governors are wrestling with fateful choices about when and how to reopen America’s economy. In designing a program to do that, it is essential that they have the clearest possible understanding of who is actually bearing the lion’s share of the additional burden from coronavirus. Assuming the first draft of the alternative diagnosis of the challenge presented in the report is confirmed, might it be possible to find a way to provide greater protection to those most vulnerable to this killer by sheltering them in ways that preclude contact with potential carriers, on the one hand, while re-opening the bulk of the economy, on the other? If something like this were to prove to be the best way forward, the fact that four in five of those over 65 had already retired from the workforce BC would be an advantage.

But to be clear. The issue addressed in our report, and in this article, is not what to do. It is how to better understand the challenge coronavirus poses to our society. Having spent five decades analyzing national security challenges, I am committed to the strategic doctrine that demands diagnosis precede prescription. Accurate diagnosis does not guarantee appropriate treatment. But misdiagnosis is a reliable predictor of failure.

In the hope of kick-starting a debate that will lead to a better diagnosis than the current Washington consensus, our report makes three recommendations.

Our first recommendation should be incontestable. The time is long past for the CDC and its related agencies to release all the demographics they have about age, sex, race, preexisting conditions, and other attributes of those being infected and dying from this novel killer. Congress and the press should demand that it be released now.

The second recommendation calls on governments at all levels to act to protect those most likely to be victims of this killer. Current choices about the allocation of scarce resources should be reviewed with an eye to differential risks coronavirus is imposing on specific groups. To cite just one example, if males over 65 with preexisting conditions or African Americans are shown to be disproportionately in the crosshairs of this killer, guidelines about who should be at work now and as the economy reopens, and who should remain sheltered at home should take this into account. If they did so, the guidelines the CDC issued last week advising workers in businesses including supermarkets and gas stations who have been in contact with a confirmed or suspected case but now show no symptoms, to return to work (as long as they have no temperature and wear face masks) should not include members of the most vulnerable groups.

Finally, we recommend radically widening the debate—far beyond the public health professionals and policymakers now driving the Trump administration’s choices. Both in developing a more accurate diagnosis of the challenge coronavirus poses to our nation, and in identifying options for what comes after the current shut down, we need the best minds from every arena in the nation in which professionals have developed expertise in analyzing novel risks wrapped in uncertainties. In particular, skilled intelligence analysts, financial wizards, and historians should join the fray.

Graham Allison is the Douglas Dillon Professor of Government at Harvard University where he has taught for five decades. Allison is a leading analyst of national security with special interests in nuclear weapons, Russia, China, and decision-making. Allison was the “Founding Dean” of Harvard’s John F. Kennedy School of Government.