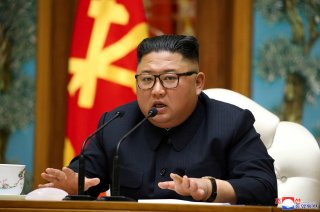 Congress’s latest coronavirus relief bill includes a provision making sure that “the Government of Iran, North Korea, Syria,” or any state sponsor of terrorism is not included in banking channels opened for the legal cannabis industry.

The $3 trillion bill comes out to 1,815 pages, and includes direct economic relief as well as national security measures to prevent another pandemic and provisions that Democrats say will indirectly help deal with the fallout of the novel coronavirus.

One of them is the Secure And Fair Enforcement (SAFE) Banking Act, which would allow legal cannabis businesses to access the U.S. banking system—except for businesses that pose a “threat to national security.”

Rep. Ed Perlmutter (D–Col.) wrote in a statement that he had “been pushing for this” because the “crisis has only exacerbated the risk posed to cannabis businesses & their employees & they need relief just like any other legitimate business.”

The bill creates a new council of U.S. officials to implement the Global Health Security Agenda, a framework created in 2014 by the United States and several other countries.

It also requires the President to appoint a Coordinator for Global Health Security and joins the United States to an international vaccine development project called the Coalition for Epidemic Preparedness Innovations.

The bill also includes several priorities that Senate Democrats have said are necessary for coping with the coronavirus crisis, including expanded early voting and vote by mail, and financial relief to state and local governments.

But the leadership of the Republican Party, which controls the Senate, has signaled that it will oppose the relief bill.

McConnell said on Tuesday that the HEROES Act was not a bill that “deals with reality” but a collection of “pet priorities” for the Democratic Party.

He instead proposed “narrowly crafted liability protection” for businesses, something President Donald Trump has voiced his support for as well.

"We now have a debt the size of our economy," McConnell said. "So I've said, and the president has said as well, that we have to take a pause here and take a look at what we've done."

Democrats, however, contend that their legislation cannot wait.