Coronavirus Survivors May Need Only One Vaccine Dose 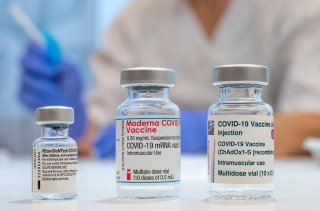 The latest estimates indicate that roughly thirty million people in the United States over the past year have contracted the novel coronavirus.

And the trending question in recent weeks is: Do these individuals still need to be inoculated against a virus that they have already defeated?

It appears that in many instances, according to two letters to major medical journals, survivors of the coronavirus, also known as COVID-19, will need only one vaccine dose—meaning that they can skip their second doses and immediately double the already scarce supply for other high-risk individuals.

“I agree with (the study’s findings),” Dr. Lee Riley, professor and chair of the Division of Infectious Disease and Vaccinology at the University of California, Berkeley, told the National Interest.

“Getting infected with the COVID-19 virus is actually like getting your first dose of the vaccine, especially if the infection was symptomatic. The immunity from the infection can last several months, so if you get your vaccine at around three months after the infection, the vaccine will boost your immunity.”

“It is a well-established principle that after initial priming from either natural infection or an initial vaccine, the second ‘dose’ will generally result in a robust ‘boost’ of one’s immune response,” he told the National Interest.

In one study, researchers at Israel’s largest hospital discovered that by the second to fourth week after the first Pfizer-BioNTech vaccine shot, rates of symptomatic infection had plummeted by 85 percent.

“Early reductions of COVID-19 rates provide support of delaying the second dose in countries facing vaccine shortages and scarce resources, so as to allow higher population coverage with a single dose.”

In the other study, Canadian researchers found evidence of more than 90 percent protection after a single dose of the Pfizer-BioNTech vaccine.

“With such a highly protective first dose, the benefits derived from a scarce supply of vaccine could be maximized by deferring second doses until all priority group members are offered at least one dose,” wrote Dr. Danuta Skowronski, of the British Columbia Center for Disease Control, and Dr. Gaston De Serres, of the Quebec Public Health Institute, who added that it wasn’t yet clear how long the protection lasts if people decide to receive just a single vaccine dose.

However, the vaccine companies, the U.S. Food and Drug Administration, and top health officials like White House coronavirus advisor Dr. Anthony Fauci have cautioned against going outside what has been scientifically tested.

“The science points directly towards continuing with what we know about from the clinical trial. . . . We know for sure that when you give a prime with the Pfizer followed by a boost twenty-one days later that you get a 94 percent to 95 percent efficacy and the difference between the level of antibodies after one dose versus two doses is about tenfold higher,” the director of the National Institute of Allergy and Infectious Diseases said Sunday on CNN’s State of the Union.

“And that is really important because when you have that high a degree comparable to the single dose alone, that’s the cushion that you would like to have when you get a variant that isn't as well-protected against by the antibodies induced by the vaccine, but you have enough level to be able to prevent at least severe disease.”

Dr. Dimitri Drekonja, an associate professor of medicine and infectious diseases at the University of Minnesota Medical School, asserted that the “definite answer really isn’t known.”

“What we know is that blood from a small number of people who had COVID once, and then received one dose of either a Pfizer-BioNTech or Moderna vaccine had high levels of neutralizing antibodies in their blood—comparable or in some cases higher than levels seen after two vaccines. What we don’t have is clinical data on thousands of people who had COVID once and then got one dose of the vaccine—did they have lower rates of clinical illness, either compared to those with no infection or vaccine or compared to people with two vaccine doses?” he told the National Interest.

“One of these evaluates measures of antibodies in the blood and makes inferences about what they might mean . . . the other looks at clinical trials with the outcome of interest being symptomatic COVID. All things being equal, I put more faith in the clinical trials of thousands of people over antibody studies of a few dozen. The antibody studies are interesting and generate new lines of exploration, and if corroborated by (more) larger studies in the future, might be something to make us consider this approach—one vaccine only for those with a history of COVID.”