Coronavirus Won't Stop Millions of Americans from Travelling for Christmas 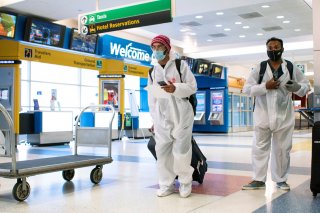 Millions of Americans are still traveling by air and on the road even as December is on pace to become the United States’ deadliest month of the coronavirus pandemic.

Just over the past weekend, more than two million people passed through security checkpoints at U.S. airports, according to data provided by the Transportation Security Administration. That figure is down nearly 60 percent from last year, but still much higher than the typical checkpoint statistics registered since the pandemic began roughly ten months ago.

The TSA, which had expected passenger volume to increase markedly during the holiday travel season, advised travelers to always follow health protocols and arrive early to the airport to allow extra time to go through security.

“COVID-19 has affected staffing and operations across the airport environment, so extra time will keep your stress level low,” the agency said in a blog post.

AAA Travel is also anticipating millions of Americans to hit the highways as Christmas approaches. Its latest estimates are pointing to as many as 84.5 million Americans traveling from December 23 through January 3, which represents a decline of roughly thirty-four million from last year.

“While Thanksgiving is traditionally spent gathering with friends and family, the year-end holidays are when Americans often venture out for longer, more elaborate vacations. That will not be the case this year,” Paula Twidale, senior vice president of AAA Travel, said in a statement.

“Public health concerns, official guidance not to travel, and an overall decline in consumer sentiment have encouraged the vast majority of Americans to stay home for the holidays.”

The U.S. Centers for Disease Control and Prevention has urged Americans not to travel for the holidays this year, warning that it could increase one’s chance of contracting and spreading the virus.

Meantime, hospitals across the United States are becoming overwhelmed and the infected are dying in record numbers, even as federal and state officials rush to roll out the vaccines from Pfizer and Moderna.

December is already the second-deadliest month of the pandemic in the United States with more than forty-five thousand deaths, according to data compiled by Johns Hopkins University. With nearly two weeks to go, that figure only trails April, which saw 60,738 Americans losing their lives to the virus.

Over the past week, the United States is reporting more than 2,600 deaths per day, compared to 2,025 fatalities per day in April. Large states, such as Texas, Illinois, Pennsylvania, and California, have each reported nearly three thousand deaths or more this month.

The University of Washington’s Institute for Health Metrics and Evaluation has projected that more than 230,000 Americans will die from coronavirus over the next three months.