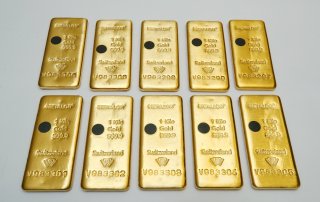 With economic uncertainty comes increased investments in gold, as “gold bugs” swear by the commodity for its inherent value and limited supply.

Since March -- when the pandemic struck the globe -- gold has reached a record high price of $1,968 an ounce, reported this week, and economic analysts expect the price to reach $2,000 an ounce within the next two months. Silver has also reported jumps in price at over $26 an ounce.

Spikes in the price of gold typically occurs during economic downturns or when interest rates reach alarmingly low levels.

"Combined with a record level of debt accumulation by the US government, real concerns around the longevity of the US dollar as a reserve currency have started to emerge," a Goldman Sachs research report wrote.

To cope with the coronavirus pandemic that’s not only a public health crisis, but also an economic crisis, the Federal Reserve shrunk US interest rates, which has caused the value of the dollar to decline by 3 percent against other currencies.

"Gold historically has moved in the opposite direction of the interest rate and the dollar," Lindsey Bell, chief investment strategist for Ally Invest, told NPR.

When gold prices increase, however, that’s usually an indicator that the economy is acting efficiently. The Feds “threw a lot of money at the market” back in March when the economy first took a tailspin, according to Bell, but also provided financial relief like the stimulus checks for $1,200, PPP loans, unemployment bonuses and more.

Although pumping money into the market allows it to react and adapt to economic changes, the governmental measures outlined in the CARES Act created more debt. Investors and “gold bugs” then purchase more gold due to inflation risks.

If the US dollar becomes a less safe economic commodity than gold, the US financial system will be at a major disadvantage, considering the country depends on the dollar as the designated form of currency.

As Congress takes on the next coronavirus relief package, it’s likely that there will be even more inflation, as national debt will accumulate from extensions of programs established in the CARES Act.

Analysts also suggest that rises in the price of gold are due to US-China tensions. The two have been engaged in a trade war since 2018, and the US recently announced an order for the closure of the Chinese consulate in Houston, initiating China’s decision to demand the US consulate to shutter in Chengdu.

"As that relationship moves backwards, you could see the slowdown of trade and economic activity between the two countries, and that then leads to uncertainty which leads to investors going to 'safe haven' assets like gold," Bell said.