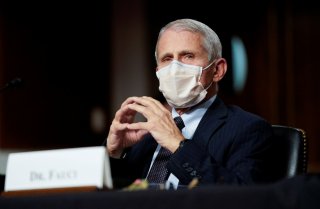 The latest numbers are indicating that the ongoing coronavirus pandemic is far from over—as new cases are starting to rise again in select regions across the United States.

Since hitting the Delta wave peak of more than one hundred seventy-two thousand cases per day in mid-September, new infections had been on a downward trajectory. However, what the data released by Johns Hopkins University are showing is that average daily cases have jumped by nineteen percent and thirty-seven percent in the Midwest and Northeast, respectively, over the past week.

Moreover, hospitalizations—which often lag an increase in infections—have risen eleven percent over the same period in the Midwest. Currently, about forty-seven thousand patients with coronavirus are hospitalized nationwide, according to data from the Department of Health and Human Services.

“The only thing that’s a little bit disconcerting is that we’re beginning to plateau,” White House chief medical advisor Dr. Anthony Fauci noted during an interview on Monday hosted by the Bipartisan Policy Center.

“In other words, the deceleration of cases is now plateaued, and in some areas of the country, we’re starting to see a bit of an uptick,” he continued.

The director of the National Institute of Allergy and Infectious Diseases also asserted that the United States must place more focus on vaccinating the roughly sixty million people across the country who have yet to be inoculated.

“There’s a lot of good news, but some challenging news that we really need to address as we go into the winter months,” he said.

Fauci also mentioned that he was troubled by the ongoing political divide over coronavirus-related science, which has only hampered the country’s response to the pandemic.

“What we’re seeing is a public health issue which requires synergy among all elements of our government, where we realize that the common enemy is the virus,” he said.

“Sometimes, when you listen to people speak, it’s almost that the enemy is each other. And we have public health decisions that are based on (ideological) considerations. You should never have that,” he added.

Meanwhile, Dr. Scott Gottlieb, the former commissioner of the U.S. Food and Drug Administration (FDA), contended that the federal government’s mixed messaging on coronavirus booster shots could be one of the most consequential missteps of the pandemic.

“I think the confusing message around the boosters may end up being one of the biggest missed opportunities in this pandemic. We now see very clear evidence of declining vaccine effectiveness over time. There’s different reasons why that may be the case, but the trend is unmistakable,” Gottlieb, a physician who worked at the FDA under former Presidents Donald Trump and George W. Bush and now serves on the board of coronavirus vaccine maker Pfizer, said over the weekend on CBS’ Face the Nation.

“This is the fastest way that we can increase the total immunity in the population because someone who has an old vaccine that may only have 50 percent of its effectiveness left, they go out and get a booster, they restore 95 percent effectiveness based on the data that we’ve seen within a matter of days,” he concluded.