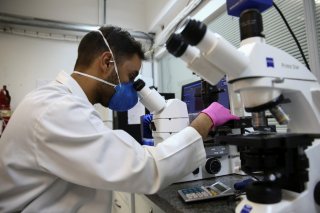 It is now nearly universally accepted that the first cases of the global COVID-19 virus emerged in Wuhan, China. While a minority, including some officials in the administration of President Donald Trump, has suggested that the virus escaped from a lab at the Wuhan Institute of Virology, the conventional explanation has been that the virus emerged in a “wet market” selling fresh meat and produce, as they are often breeding grounds for disease. Other epidemics, including China’s SARS outbreak in November 2002, have been traced to similar markets.

Either explanation—a man-made virus escape or natural evolution from an unhygienic wet market—means that the Chinese government is to some extent responsible for the global pandemic. In disputing this characterization, Chinese press outlets have provided theories of their own—including that the virus secretly escaped from a U.S. military facility in Fort Detrick, Maryland. A spokesman at China’s Foreign Ministry suggested that the facility could have housed the virus, given its alleged security lapses in the past.

The Global Times, a Chinese state-owned newspaper, amplified the spokesman’s claim. According to the outlet, more than 25 million Chinese citizens have signed an online petition calling for an investigation into Fort Detrick.

To be clear, there is absolutely no evidence that Fort Detrick has anything to do with the virus’s emergence in Wuhan. Other conspiracy theories regarding the virus’s origin have been amplified on the Chinese internet in the past, although they have generally not been taken seriously outside the country.

It is also interesting that in the past, the Chinese government has vigorously denied the lab-leak theory, claiming that the virus’s genome indicated it had evolved naturally rather than artificially. In this sense, the spokesman’s call for an investigation may not be in good faith; instead, it could be understood as encouraging a redirection from investigating the Wuhan Institute of Virology to investigating a U.S. lab.

Investigating the virus’s origins could be key to preventing a future pandemic, but tensions between the United States and China, which long predate the COVID-19 pandemic, have made cooperation between the two nations in the area of disease control difficult. Beijing has largely not allowed the World Health Organization to investigate inside China, insisting that it will conduct its own internal investigation into the emergence and spread of the virus.