Critics Slam Biden For Declaring the ‘Pandemic Is Over’ 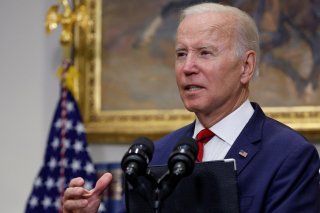 President Joe Biden is drawing plenty of criticism after saying during an interview on CBS’ 60 Minutes over the past weekend that the Covid-19 pandemic was “over.”

“The pandemic is over,” Biden said. “We still have a problem with Covid. We’re still doing a lotta work on it. It’s—but the pandemic is over. If you notice, no one’s wearing masks. Everybody seems to be in pretty good shape. And so, I think it’s changing.”

“The pandemic isn’t over,” he said. “And we will remain vigilant, and of course, we continue to look for and prepare for unforeseen twists and turns.”

On Monday, The Hill reported that Dr. Anthony Fauci, Biden’s chief medical adviser, reiterated in a talk with the Center for Strategic and International Studies (CSIS) that the country is not where it needs to be regarding the pandemic.

“How we respond and how we’re prepared for the evolution of these variants is going to depend on us,” said the nation’s top infectious disease expert, who plans to step down in December after half a century in government.

“And that gets to the other conflicting aspect of this—is the lack of a uniform acceptance of the interventions that are available to us in this country where even now, more than two years, close to three years, into the outbreak, we have only 67 percent of our population vaccinated and only one-half of those have received a single boost,” he continued.

Fauci also noted that the United States is still seeing more than 400 Covid-related deaths on a daily basis.

“We are not where we need to be if we’re going to be able to, quote, ‘live with the virus,’ because we know we’re not going to eradicate it,” he said. “We only did that with one virus, which is smallpox, and that was very different because smallpox doesn’t change from year to year, or decade to decade, or even from century to century.”

Meanwhile, despite what health experts are saying, it appears that many Americans have already moved on from the pandemic, according to the latest installment of the Axios/Ipsos Coronavirus Index. The findings revealed that most Americans admit that there is still a possibility of them catching the virus, but their perceived risk of contracting the disease continues to decline. Forty-six percent of respondents indicate they have already returned to their normal, pre-pandemic life.

“Most Americans have turned the page on the Covid pandemic, even as most acknowledge the virus is likely to be with us for the long term,” said Cliff Young, president of Ipsos U.S. Public Affairs, per Axios. “While interest in easy preventatives, like the new Omicron-specific booster, remains high, most people are taking Covid risks in stride.”