Deal or No Deal? Pelosi and Trump Administration Closer to Stimulus Agreement 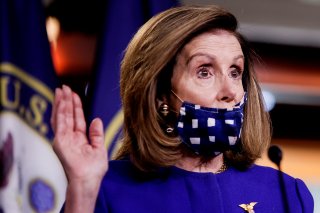 Deadlines aren’t meant to be broken, but reaching a deal on the next coronavirus stimulus package is apparently an exception.

House Speaker Nancy Pelosi (D-Calif.) posed a forty-eight-hour deadline on Sunday for top White House aides to strike a deal with Democrats if they want to pass the next stimulus bill before Election Day, a timeline that’s clearly passed as Pelosi and Treasury Secretary Steven Mnuchin remain polarized on key provisions within the bill, particularly over state and local assistance, as well as its overall price tag.

Despite the clear divide, White House chief of staff Mark Meadows brewed optimism, as he thinks the two will reach a deal by the end of the week.

“I am optimistic. We do share one goal and that is hopefully to get some kind of deal in the next forty-eight hours or so,” Meadows said in an interview on Fox Business on Wednesday morning.

He added that discussions “have entered a new phase” but referred to state and local aid being a major area of disagreement.

“I can tell you that the negotiations have entered a new phase, which is more on the technical side of trying to get the language right if we can agree upon the numbers,” Meadows said. “We are still apart, still a number of issues to work on, but the last twenty-four hours have moved the ball down the field.”

Pelosi also preached confidence in striking a deal with Republicans, as she wrote to House Democrats Tuesday night after she and Mnuchin spoke on the phone. “I remain hopeful that we can reach an agreement before the election. It will be safer, bigger, and better, and it will be retroactive,” she wrote.

Back-and-forth negotiations between Pelosi and Mnuchin have loomed for months, as the two cannot agree on issues including funding for cities and states, child care, tax credits for lower-income families, as well as liability protections that Democrats disapprove of.

“The issue with the states and local governments is that their economies have been devastated by the Covid-19-induced deep economic recession. As a result, their revenue collections have plummeted, which means that they have to slash spending, including on social services, to meet legally imposed balanced budget requirements for the states. This is likely to produce more pain in those areas, which also happen to be mainly Democratic in political leaning.” Desmond Lachman, an economist and resident fellow at the American Enterprise Institute, said. “Since these are the Democrats’ constituencies, Nancy Pelosi is very sensitive to their plight.”

Pelosi and Mnuchin do agree, however, that certain sectors, including the airline industry, should receive relief and that Americans should expect another round of $1,200 stimulus checks. The speaker also said on Tuesday afternoon that the White House has improved its legislative language on the national testing strategy.

House Democrats most recently pushed for more than $400 billion in state and local government relief in their $2.2 trillion coronavirus stimulus package that was unveiled in September, while the White House allotted $250 billion for the measure in their GOP counter-offer.

Economists have said that Democrats want to bail out devastated state and local governments, regardless of pre-existing institutional and structural issues, while Republicans don’t want to pump more federal aid into a structure that “already had problematic finances,” according to Scott B. MacDonald, a contributor to the National Interest and chief economist at Smith’s Research & Gradings.

But Senate Republicans are at a crossroads in terms of backing even a bipartisan bill drafted by Pelosi and Mnuchin, as many of them come from conservative districts that don’t support massive spending measures, while others, as MacDonald notes “are in tight races and failure to get some relief will hurt” their re-election bid. “This makes getting a unified Republican vote in the Senate a question mark,” he added.

“Not getting a deal for the states allows Pelosi to paint the Republicans as heartless while accepting a deal makes it difficult for the Republicans to claim that they are standing up for sound public finances and budget discipline,” Lachman said.

The overall price tag of the bill has made Senate Republicans balk at supporting another big spending measure, as it would widen the nation’s deficit.

“It seems to me that the White House has come a long way in meeting Pelosi’s demands as to the appropriate size of the package and this should not be a deal-breaker,” Lachman said. “However, Mitch McConnell has made it clear that he is unhappy with what the White House is doing.”

Senate Majority Leader Mitch McConnell (R-Ky.) reportedly told GOP senators at a private lunch on Tuesday that he is discouraging President Donald Trump’s administration to strike a deal with Pelosi just days before the election, as it will further split an already divided Republican Senate.

But the longer talks on Capitol Hill remain inconclusive, the stronger the economy is strained as more small businesses permanently shutter, millions of Americans file for unemployment and families enter the poverty line.

“Meanwhile without a package in place soon, the economy is likely to flounder,” Lachman said.