Democrats vs. Republicans: The Coronavirus Opening Debate Has Begun 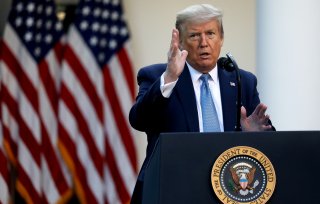 With the estimated growth of the coronavirus in the United States beginning to flatten, the Trump administration and Republicans around the country are eager to see social distancing restrictions lifted and the economy reopened. Democrats warn, however, that eliminating quarantine conditions too soon could endanger people’s lives and health.

Since February and early March when he downplayed the seriousness of the threat, President Donald Trump’s trigger finger has been itching to reopen businesses and get Americans back to work. Previously overseeing record low unemployment, the lowest in fifty years, Trump is now overseeing record high unemployment, the highest in eighty. The numbers of economic prosperity had been Trump’s most touted accomplishment going into this November’s presidential election.

Today the White House announced the creation of a task force to focus on reopening the U.S. economy. Every Senate Republican has been invited to join, excluding Mitt Romney of Utah, who voted to convict President Trump in his February trial.

Meanwhile, the states hardest hit by the pandemic, including New York, New Jersey, and Michigan, are all governed by Democrats and take issue with the idea that the worst of the crisis has passed. Instead, Democratic represents support another multi-trillion-dollar stimulus package to provide temporary relief to affected Americans.

“The economic depression is directly correlated with the rise in transmission of the coronavirus,” said Democratic Rep. Raul Ruiz of California. “So, for us to focus on the public health and safety aspects is the right way to help get our economy back in order.”

One of the primary divergences between the two political parties is the purpose of the quarantine; this leads to different measures of success. Republicans are holding to what was originally presented, that the quarantine was necessary to stop the exponential growth rate of the coronavirus and to flatten the curve. Now that the curve has begun to flatten, argue Republicans, businesses should be allowed to Republican. Democrats, on the other hand, believe the purpose should reach further, and that quarantine should continue until every coronavirus outbreak in the country is under control. If quarantine is lifted too early, the virus could come back, and the country would find itself back at step one.

Others who would like to see quarantine lifted immediately are civil liberties advocates who are horrified by the emergency powers that governors have clothed themselves with. New Jersey Governor Phil Murphy has been one of the most prosecutorial governors in enforcing social distancing, including the arrest of people participating in small gatherings. These gatherings included religious services. When asked about the issue by Fox News host Tucker Carlson, Murphy responded, “I wasn’t thinking of the Bill of Rights when we did this."