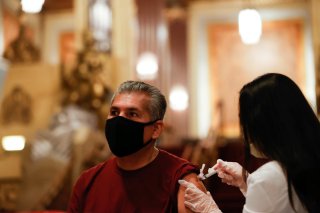 On Tuesday, the U.S. Food and Drug Administration (FDA) issued an emergency use authorization that allows healthcare providers to use a new strategy to split Jynneos monkeypox vaccine doses in hopes of inoculating up to five times as many people.

According to a CNN report, the vaccine can now be offered to high-risk adults intradermally, or between the layers of the skin, rather than subcutaneously, or under the skin, as it has been typically administered. This technique will allow providers to get up to five doses out of a standard one-dose vial.

“In recent weeks the monkeypox virus has continued to spread at a rate that has made it clear our current vaccine supply will not meet the current demand,” FDA Commissioner Dr. Robert Califf said in a statement.

“The FDA quickly explored other scientifically appropriate options to facilitate access to the vaccine for all impacted individuals. By increasing the number of available doses, more individuals who want to be vaccinated against monkeypox will now have the opportunity to do so,” he continued.

Earlier on Tuesday, Department of Health and Human Services (HHS) Secretary Xavier Becerra issued a determination to pave the way for the emergency use authorization. “Today’s action will allow FDA to exercise additional authorities that may increase availability of vaccines to prevent monkeypox while continuing to ensure the vaccine meets high standards for safety, effectiveness and manufacturing quality,” he said.

As of Monday, the government has shipped roughly 618,000 doses of the Jynneos vaccine to states and jurisdictions. However, the Centers for Disease Control and Prevention (CDC) has estimated that at least 1.5 million Americans are eligible for monkeypox vaccination. The Hill reported that Washington has already purchased much of the global supply of the Jynneos vaccine, but most of the shots are stored frozen in bulk at the manufacturer in Denmark. The vaccine doses need to undergo a process called “fill and finish” to put them into usable vials to be shipped and then administered.

The FDA’s move comes less than a week after the Biden administration declared monkeypox a public health emergency, which will help mobilize more resources and personnel to battle the outbreak that has spread rapidly across the country in recent months. The declaration, which comes a little less than two weeks after the World Health Organization (WHO) designated the outbreak an emergency of international concern, lasts for only ninety days, but it may be extended by HHS.

There are currently about 9,500 monkeypox infections across forty-nine states, according to the CDC. Globally, more than 31,000 cases across eighty-nine countries have been confirmed. Health officials have contended that they are not exactly sure how fast the disease has spread, largely due to the fact that they have limited information about people who have been diagnosed and are unsure how many infected individuals might be spreading it unknowingly.