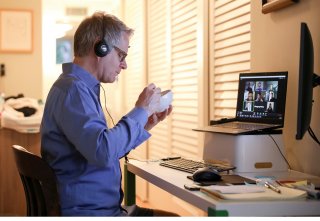 Analysts at Deutsche Bank have proposed a “privilege tax” of 5 percent on post-pandemic remote workers to help subsidize lost wages due to the novel coronavirus for low-income employees.

Titled “What We Must Do to Rebuild,” the research report argues that employees who work from home have access to immediate financial perks, including reduced costs for travel, food, and clothing, while contributing less to the economy’s infrastructure, the report said.

Deutsche Bank thematic strategist Luke Templeman noted that a special tax on remote workers had been needed for years but “COVID has just made it obvious.”

“A work-from-home tax (makes) sense to support the mass of people who have been suddenly displaced by forces outside their control,” Templeman said in the report.

“From a personal and economic point of view, it makes sense that these people should be given a helping hand. . . . Those who are lucky enough to be in a position to ‘disconnect’ themselves from the face-to-face economy owe it to them.”

On an average salary of $55,000, it is estimated that the average remote worker would pay roughly $10 a day in tax, which would help raise a total of $48 billion annually. This amount could pay for $1,500 grants for twenty-nine million employees who aren’t able to work from home and earn under $30,000 a year.

The report added that the 5 percent tax should only apply when the government advises people to work from home, such as during this ongoing pandemic. Low-income workers and the self-employed would be excluded from the tax.

“Our calculations suggest the amounts raised could fund material income subsidies for low-income earners who are unable to work remotely and thus assume more ‘old economy’ and health risks,” Jim Reid, the global head of fundamental credit strategy and thematic research at Deutsche Bank, said in the report.

Amid the ten-month-long pandemic, the United States has witnessed ten times more people working from home, now making up 56 percent of the entire workforce. In the United Kingdom, the percentage has surged seven-fold to 47 percent.

“The sudden shift to work from home means that, for the first time in history, a big chunk of people have disconnected themselves from the face-to-face world yet are still leading a full economic life,” Templeman said.

“That means remote workers are contributing less to the infrastructure of the economy whilst still receiving its benefits.”