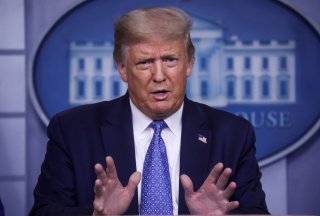 President Donald Trump held a second coronavirus press briefing this week after taking a three-month break and noted that “in a very short period of time,” the country will see a “cure” for the virus.

“That would be great, if we could go into the hospital, and just cure people and we’re at a position we’re actually able to, to a certain extent with what we have right now, and we think in a very short period of time, we’ll be able to do that,” Trump said in his opening remarks.

“I want to send a message of support to every senior citizen who has been dealing with the struggle of isolation in what should be the golden years of your life. We will get to the other end of that tunnel very quickly, we hope. The light is starting to shine,” Trump said.

For the second night in a row, the president wasn’t center-stage with Dr. Anthony Fauci, head of the National Institute of Allergy and Infectious Diseases. But, Trump stressed that “the relationships are all very good,” referring to Fauci and other top US health officials.

“I just spoke to Dr. Fauci. Dr. [Deborah] Birx is right outside and they’re giving me all of everything they know as of this point in time and I’m giving the information to you and I think it’s probably a very concise way of doing it. It seems to be working out very well," he said.

Trump also commented, in response to a question asked by a reporter, that he would decide within the next day, if masks will be mandated on federal property.

Even though Trump didn’t wear a mask during the press briefing, he did uncover a mask from his pocket and continued to encourage people to wear one in public. The president has recently changed views on wearing a mask, as in the past he was rarely seen in wearing one.

The president attributed the surges in coronavirus cases in areas including Texas, Arizona and Florida to “demonstrations,” or protests, “travel” and activity at beaches.

“There are likely a number of causes for the spike in infections cases,” Trump said. “Cases started to rise among young Americans shortly after demonstrations, which you know very well about, which presumably triggered a broader relaxation of mitigation efforts nationwide.”

“A substantial increase in travel also was a cause, increased gathering on holidays such as Memorial Day as well as young people closely congregating at bars, and probably other places,” he added.

When asked about the reopening of schools, Trump said he’s “comfortable” sending his grandchildren back to school and that he wants schools to be “open 100 percent.”

“We would like to see schools open,” he continued.

In the next coronavirus relief package that’s currently in the works, the reopening of schools remains a bipartisan top priority, as congressional leaders push for increased funding for schools’ medical supplies and other needs to ensure a safe reopening.

“Our strategy is to shelter the highest risk Americans, while allowing younger and healthier citizens to return to work or school, while being careful and very vigilant. Wear a mask, socially distance and repeatedly wash your hands,” Trump said.