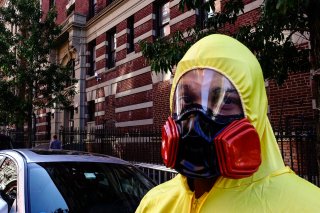 Even as Covid-19 and monkeypox still grab headlines on a daily basis, there appears to be yet another virus that has put the world on high alert.

According to ABC News, Ghana on Sunday confirmed the nation’s first outbreak of the deadly Marburg virus, a highly infectious Ebola-like disease for which there is no approved vaccine or treatment.

Two unrelated men—one twenty-six years old and another fifty-one years old—were confirmed to have died after testing positive for Marburg in the southern Ashanti region of the country, the World Health Organization (WHO) said.

“Health authorities have responded swiftly, getting a head start preparing for a possible outbreak. This is good because without immediate and decisive action, Marburg can easily get out of hand,” Dr. Matshidiso Moeti, the WHO's regional director for Africa, said in a statement.

“WHO is on the ground supporting health authorities and now that the outbreak is declared, we are marshaling more resources for the response,” he continued.

ABC reported that nearly a hundred contacts have been identified so far in Ashanti as well as the northwestern Savannah region. They are currently under quarantine and are being monitored by health authorities.

According to the WHO, Marburg is a rare but severe viral hemorrhagic fever—nearly as deadly as the more well-known Ebola virus disease that has plagued West Africa for years.

Health experts believe that Marburg likely has been transmitted to people from African fruit bats as a result of prolonged exposure from people working in mines and caves that have Rousettus bat colonies. The virus spreads person-to-person through direct contact with the bodily fluids of the infected individuals, surfaces, and materials. It is not an airborne disease.

After infection, illness can begin abruptly, with high fever, severe headache, and malaise. Muscle aches and cramping pains are also common features. Many patients develop severe hemorrhagic signs within a week, according to the WHO.