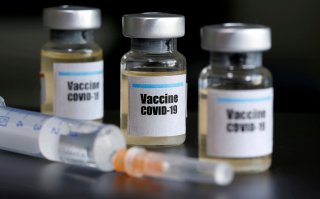 The coronavirus pandemic is not only a public health issue, said former NASCAR driver and environmental activist Leilani Münter. It’s also a showcase for the threats posed by the strain humanity is putting on the planet.

Case in point: while we still don’t know the exact source of COVID-19, we do know that it originally leaped from an animal host. And that host may have been forced into contact with humans as habitat destruction continues to rise globally; some 31,000 square miles of forest are destroyed each year, an area roughly the size of South Carolina.

Münter, who joined the national security podcast Press The Button, is no stranger to this issue. In 2015, she starred in Racing Extinction, a documentary which detailed the ongoing global mass extinction of plant and animal species caused by human activity. She said the film has gained renewed traction in recent months, in part because of scenes filmed in a wet market in the Chinese city of Guangzhou, a location similar to the Wuhan wet market near which COVID-19 is thought to have originated.

Back then, the United States was still running a program called PREDICT, an international network of scientists tasked with hunting down viruses likely to jump from animals to humans. Coronaviruses, like the one that caused the severe acute respiratory syndrome (SARS), were a major concern; in 2007, researchers from the University of Hong Kong said the prevalence of SARS-like viruses in bats was a “time bomb.”

But PREDICT, which had cost about $207 million over its ten year existence—or less than the cost of two F-35B fighter jets—was ultimately shut down by the Trump administration in October 2019, the same month COVID-19 may have made its first leap from animal to human.

Münter believes this move was tragically shortsighted. “The CDC estimates that three quarters of new human diseases originate from animals,” she said. “These high impact threats that humanity is facing but that we know are coming should actually be called gray rhinos instead of black swans,” Münter continued, citing the term popularized by Michelle Wucker. “They’re dangerous, we know for certain they are in our future, and we can see them coming towards us.”

Animal-transmitted diseases will become more likely as the combined effects of climate change and habitat destruction force animals and humans into closer contact. “We’re increasing the frequency where these viruses have the opportunity to make the jump [from animal to human],” Münter warned. “Either from the wild or a wild species interacting with livestock and then making the jump to humans through our livestock consumption.”

Such a threat assessment calls out for a reprioritization of federal funds, argued Münter. “Our future challenges and threats to our national security are going to come from a lot of places that have nothing to do with weapons and guns,” she said, pointing to the sixty percent of discretionary spending that goes to the Pentagon each year. Military spending “is not going to protect us against future pandemics. It’s not going to protect us against climate change.”

Even if the U.S. government did divert Pentagon funds to combat climate change and future pandemics, the more difficult challenge may be convincing Americans to adopt more climate-friendly lifestyles such as eating less meat or buying an electric vehicle, said Münter. But the self-professed “vegan hippie chick with a race car” is used to swimming upstream.

“What I was trying to do in the racing world was reach out to people that didn’t agree with me,” Münter explained. “You have to get outside of your box.” She pointed to her NASCAR collaboration with Operation Free, a group of veterans and national security experts working to promote climate change awareness and a clean energy future.

“It was such a powerful message because the NASCAR community has a longstanding relationship” with the military, said Münter. “So, it was powerful for these NASCAR fans to come to my tent at the racetrack and meet military generals and veterans from Iraq and Afghanistan” who would talk about the geopolitical and environmental risks entailed by American oil dependence.

“Of course, there was a little confrontation” to her vocal climate advocacy, Münter admitted. But the recent coronavirus pandemic has only sharpened her belief that the world needs to change, and that the difficult task of persuading people to act is worth it.

“As long as we continue on this path that we are on,” she explained, “we are setting ourselves up to take ourselves off the planet.”

The entire interview with Leilani Münter is available here on Press The Button.