Fauci Adjusts Prediction on When U.S. Will Control Pandemic 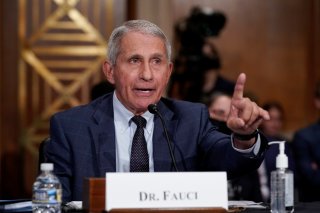 White House chief medical advisor Dr. Anthony Fauci made efforts to correct his response to National Public Radio when he said on Monday that if enough people eventually get vaccinated, the United States could control the coronavirus pandemic by the fall or winter of next year.

However, during an interview with CNN’s Anderson Cooper, the head of the National Institute of Allergy and Infectious Diseases noted that the timeline could be even sooner.

“Anderson, I have to apologize. When I listened to the tape, I meant to say the spring of 2022, so I did misspeak,” Fauci said.

If “the overwhelming majority of the ninety million people who have not been vaccinated” now get inoculated, “I hope we can get some good control in the spring of 2022. I didn’t mean the fall—I misspoke,” he added.

However, Fauci did contend that the timeline isn’t set in stone.

“But again, there’s a big caveat there—this is a very wily virus. We thought we were going to have that degree of freedom as we got into the Fourth of July and the summer. And then along comes a sucker punch with the Delta variant, which is extraordinary in its ability to spread from person to person,” he said.

“So, we hope we’ll be there at the time frame I mentioned, correctly being the spring of 2022, but there’s no guarantee because it’s up to us. If we keep lingering without getting those people vaccinated that should be vaccinated, this thing could linger on, leading to the development of another variant which could complicate things,” he continued.

Nearly fifty-two percent of the total U.S. population is fully vaccinated, according to data compiled by the U.S. Centers for Disease Control and Prevention (CDC).

According to Dr. Scott Gottlieb, the former commissioner of the U.S. Food and Drug Administration (FDA), it appears that the hard-hit South may have already turned the corner in the pandemic fight.

“I thought there was an indication the South was peaking, and I think it’s pretty clear right now the South has peaked,” he said Monday on CNBC’s Squawk Box.

“It doesn’t feel that way because we still have a lot of new infections on a day-over-day basis, and the hospitals still have some very hard weeks ahead. They’re still going to get maxed out as the infections start to decline,” he added.

The Delta variant—first detected by scientists in India last fall—is now responsible for more than ninety-five percent of all sequenced cases in the country, according to the CDC.

The current seven-day average of daily new coronavirus cases is about one hundred forty-seven thousand—which is more than ten times higher compared to just two months ago and about thirteen percent higher compared to the week prior, according to the latest data compiled by Johns Hopkins University.