Fauci on Coronavirus Vaccine: "Chances of it Being 98% Effective Is Not Great" 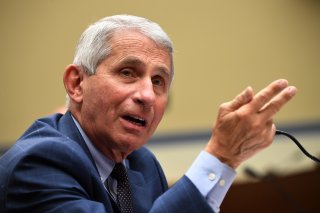 White House coronavirus advisor Dr. Anthony Fauci has asserted that there is only a slim chance that a COVID-19 vaccine with 90%-plus effectiveness will be developed in the coming months.

Health officials and medical experts, though, are still hoping for a vaccine that’s 70%-plus effective, but 50% or 60% could be passable as well.

“The chances of it being 98% effective is not great, which means you must never abandon the public health approach,” Fauci, the director of the National Institute of Allergy and Infectious Diseases, said during a live-streamed Q&A discussion with Brown University School of Public Health.

“You’ve got to think of the vaccine as a tool to be able to get the pandemic to no longer be a pandemic, but to be something that’s well controlled.”

The Food and Drug Administration confirmed in late July that it would fully clear a coronavirus vaccine if it is deemed safe and at least 50% effective.

“But we said 50%, and the reason was because we felt that that was a reasonable floor given the pandemic.”

A coronavirus vaccine with 50% effectiveness would be similar to what is used for influenza, but much below the effectiveness of a measles vaccination, which is roughly 93% effective, according to the Centers for Disease Control and Prevention.

The seventy-nine-year-old Fauci added that when it comes to any disease, people must keep in mind that there’s control, elimination and eradication. Since vaccines were first developed, scientists have been able to fully eradicate only one human-affecting infectious disease—and that was smallpox in 1980.

“What I’m shooting for is that with a vaccine and good public health measures, we can bring it down to somewhere between really good control and elimination,” Fauci said.

“So that’s what a vaccine is going to do, but it’s not going to do that alone.”

By December or early next year, health officials and scientists are anticipating that at least one of the numerous potential coronavirus vaccines in development worldwide will be given the green light.

Drug companies Pfizer and Moderna both recently started late-stage trials for their potential vaccines and are expected to enroll thousands of participants.

There are now more than 19.9 million confirmed cases of coronavirus worldwide, including at least 732,000 deaths, according to the latest data from Johns Hopkins University.

The U.S. has the most cases by far, with nearly 5.1 million confirmed infections and more than 163,000 deaths.