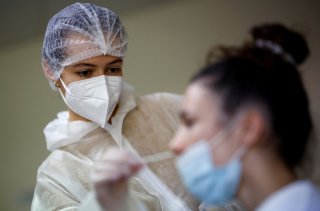 The highly transmissible Omicron BA.5 subvariant now accounts for nearly 80 percent of current cases of Covid-19 in the United States, according to new data released by the U.S. Centers for Disease Control and Prevention (CDC).

The coronavirus subvariant, which has shown to be particularly adept at evading the immune protection afforded either by vaccination or prior infection, has been driving a surge of new infections in both the United States and across the globe. Just last month, BA.5, first detected in the United States at the end of April, only represented 29.1 percent of cases. Meanwhile, another Omicron subvariant, the BA.4, currently makes up nearly 13 percent of all cases.

According to a USA Today analysis of Johns Hopkins University data, twenty states have confirmed that they had more deaths than the week prior, while twenty-nine states reported more cases than the week before.

In an interview Sunday on CBS News’ Face the Nation, Dr. Scott Gottlieb, former commissioner of the U.S. Food and Drug Administration (FDA), noted that the BA.5 subvariant possesses the ability to evade immunity acquired from vaccination and prior infection. He also believed case numbers are being underreported.

“It’s the B-5 variant that’s growing. It has the capacity to evade the immunity that we’ve acquired from vaccination and also from prior infection. It does seem to be that B-2 infection confers more robust immunity against this B-5 variants [sic], so places that had big outbreaks of B-2, like the Northeast, are probably going to be more protected. There’s 100,000, over 100,000 cases on average being reported on a daily basis. We’re probably detecting one in ten infections right now. So it’s probably more like a million,” said Gottlieb, a physician who worked at the FDA under former Presidents Donald Trump and George W. Bush and now serves on the board of Covid vaccine maker Pfizer.

“I think most Americans have started to accept this as part of the fabric of daily living. In part that’s, that’s based on a wholesale recalibration of risk, in part is based on the fact that there’s very few people who are immune. … So we have to recognize that this spread is happening against the backdrop basically, of normal living,” he continued.

In response to the fast-climbing cases of BA.5, the FDA announced last month that the next round of booster shots, likely rolling out this fall, will be modified to target the subvariants BA.4 and BA.5 in addition to the original strain of the virus.

“As we move into the fall and winter, it is critical that we have safe and effective vaccine boosters that can provide protection against circulating and emerging variants to prevent the most severe consequences of COVID-19,” Dr. Peter Marks, director of the FDA’s Center for Biologics Evaluation and Research, said in a release.

Earlier this week, per The Hill, Dr. Anthony Fauci, chief medical adviser to President Joe Biden, said that “it’s essential that we get more resources, or we’re not going to meet the challenge that’s inevitable.”

“We need the next generation of vaccines, particularly mucosally administered vaccines that would do much better,” he added.