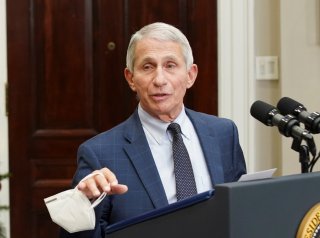 It was only a matter of time, but the first confirmed case of the Omicron variant of COVID-19 has been reported in the United States.

According to CNN, Dr. Anthony Fauci, director of the National Institute of Allergy and Infectious Diseases, announced the case Wednesday in a White House briefing. The case was in California and concerned an individual who had recently traveled from South Africa.

Dr. Fauci added that the person in question had been isolating and that all close contacts had tested negative. The person was fully vaccinated, but Fauci was not aware of whether they had received a booster shot.

Genetic sequencing at the University of California at San Francisco determined that the person was indeed infected by the Omicron variant, although the Centers for Disease Control and Prevention (CDC) later confirmed it.

The variant, titled  B.1.1.529 before the World Health Organization named it Omicron, was first identified around Thanksgiving in South Africa, although there have now been reports that it may have shown up in Europe before South Africa. As of now, the variant has had reported cases in twenty-three countries, including Canada, the UK, Israel, Belgium, the Netherlands, Germany, Italy, and Hong Kong, per CNBC.

The White House's COVID-19 Response Coordinator Jeff Zients, issued a statement Wednesday upon the news of the first Omicron case in the United States

“We are prepared to meet this challenge with science and speed. The President’s medical team continues to believe that existing vaccines will provide some level of protection against severe illness from Omicron, and individuals who have gotten boosters have even stronger protection. As such, we urge all adults to get their booster shots and to get themselves and their kids vaccinated, if they haven’t already,” Zients said.

“The President will have more to say about our strategy for fighting COVID this winter tomorrow, but for now, we know that: This new variant is cause for continued vigilance, not panic.  We know what it takes to limit the spread of COVID: Get vaccinated, get boosted, and take public health measures like masking and distancing,” he continued.

The arrival of the first case in the United States caused the stock market to drop, with the Dow falling two hundred points Wednesday, per CNBC. The Dow gave up a five-hundred-point gain after the CDC confirmed the first U.S. case. Airline and cruise line stocks were the hardest hit. It continued what’s been an extremely volatile week on Wall Street.

“It feels as though the market was wondering when, not if there was going to be this new variant on our shores,”  Art Hogan, National Securities chief market strategist, told CNBC. “I think we’re at a place now where we understand there’s a diminishing impact with new waves and new variants with this virus. I think that’s important, and the market understands that.”

The World Health Organization, on November 28, declared what is now called the Omicron variant as a “variant of concern.” The organization said at the time that it’s not yet clear how dangerous the variant is when it comes to transmissibility, the severity of disease, or the effectiveness of either prior infection or vaccination.

“Preliminary evidence suggests there may be an increased risk of reinfection with Omicron (ie, people who have previously had COVID-19 could become reinfected more easily with Omicron), as compared to other variants of concern, but information is limited. More information on this will become available in the coming days and weeks,” the WHO said.

“WHO is working with technical partners to understand the potential impact of this variant on our existing countermeasures, including vaccines. Vaccines remain critical to reducing severe disease and death, including against the dominant circulating variant, Delta. Current vaccines remain effective against severe disease and death.” Studies are currently underway to determine the answers to those questions.

“Absolutely too early to conclude that Omicron is milder or more severe on average, or that vaccine efficacy will be preserved as is, or not—or even why exactly it's spreading. Just too early, and I would not pay any attention to conclusive sounding statements,” Zeynep Tufekci, a professor and writer who has been widely read throughout the pandemic, said on Twitter this week.

The United States, meanwhile, put in a travel ban last week from South Africa and other countries in the southern part of Africa. However, reports that the Omicron variant had been spotted in Europe before Africa has led some to question whether the travel bans were necessary.