Gun Sales Are Spiking Thanks to Coronavirus and The 2020 Election 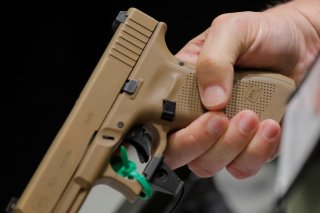 With under three weeks until election day, gun sales have continued to pick up—and according to the FBI’s National Instant Criminal Background Check System (NICS), which is used an industry barometer, there has been a 41 percent increase in activity during the first nine months of the year compared to the same period in 2019.

That is notable as last year set the record for firearm sales, but since the outbreak of the coronavirus, firearms have been steadily in demand. Guns are always essentially “recession-proof” but this year the combination of the pandemic, calls to “defund the police” and an election that could see new legislators installing gun control—sales have been simply off the charts.

The first half of the year had already seen more than nineteen million checks conducted, which was more than all of 2012 or any year prior—going all the way back to when the system was put in place at the end of 1998. The sales did not decline in the months that followed.

While many American gun owners certainly don’t need another reason to buy another firearm, what has driven sales this year is the number of first-time buyers, which shot up to record levels. This was very much due to the aforementioned coronavirus pandemic but also the massive civil unrest, with many buyers saying they fear that the contentious presidential race could erupt into violence.

First-time purchases have more than doubled in 2020 and accounted for 40 percent of all sales this year, according to a report by Reuters and The New York Post, which cited gun industry analysts and trade groups.

Just as the sales in the spring were smashing records, so too did the sales last month. There were more than 28.8 million background checks through the end of last month, which surpassed the record-setting 28.4 million from a year ago.

Eight of the top ten weeks for background checks took place this year, with the busiest week coming this past March just after the World Health Organization (WHO) declared coronavirus a pandemic. The top month for background checks this year came in June, which came after the death of George Floyd while he was in police custody and sparked national protests and civil unrest.

The firearms industry has seen brisk business, and two of the nation’s top gun makers, Smith & Wesson and Sturm Ruger, saw their stock prices increase this year. S&W was up by 131 percent while Ruger’s stock was up 59 percent.

In July, sales of the AR-15 modern sporting rifle were so strong that Colt Manufacturing Company began to sell the firearm again just months after it exited the civilian market to concentrate on military and law enforcement sales. The company had sales of the popular “black gun” slump as supply industry-wide largely exceeded demand, which drove down the price.

This year’s uncertainty saw sales increase and also the price that shooters were willing to pay for the AR-15, which inspired Colt to re-enter the market. Given that Samuel Colt was far more of a businessman than an actual gun designer he would have been pleased by the company’s ability to pivot accordingly.

However, one company that wasn’t able to right its course this year, despite the strong sales, was Remington Arms Company, which filed for bankruptcy in July. Last month it was announced that the company’s factory in Ilion, New York would be sold off as part of the company’s breakup. The gunmaker, which was founded in Ilion in 1816 by blacksmith Eliphalet Remington, will likely see its various businesses and brands purchased and absorbed by other industry firms.