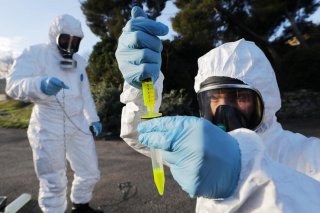 The United Kingdom should prepare for the “worst point” of the ongoing coronavirus pandemic, as even more cases and deaths will likely be seen in the coming weeks, England’s chief medical officer Chris Whitty warned.

“We’re now at the worst point of this epidemic for the UK,” he said Monday in an interview with the BBC. “In the future, we will have the vaccine, but the numbers at the moment are higher than they were in the previous peak—by some distance.”

With more than three million cases, the UK recently became the fifth country worldwide to reach that grim figure, according to the latest data compiled by Johns Hopkins University. The nation’s death toll of eighty-three thousand is also the highest total on the European continent.

During the past several weeks of the surge, many hospitals across the UK have operated at or near capacity. Currently, more than thirty thousand patients are receiving care in hospitals, compared to roughly eighteen thousand during the pandemic’s first peak in April.

“We’re now at a situation where in the UK as a whole, around one in fifty people is infected, and in London, it’s around one in thirty,” Whitty said.

“There is a very high chance that if you meet someone unnecessarily, they will have COVID.”

London Mayor Sadiq Khan shared similar sentiments, adding that the capital city was at risk of running out of hospital beds.

“This virus is out of control,” he said in an interview on LBC radio.

“The (National Health Service) is on the cusp of being overwhelmed. There has been no time during this pandemic where I’ve been more concerned than I am today.”

Last week, England entered a third national lockdown that closed all nonessential shops, schools, and universities for at least six weeks. Many citizens, however, have grown frustrated with the new restrictions that require people to stay home except for essential reasons, such as grocery shopping. Police have been issuing fines to those who break the rules.

Whitty, though, stressed that following mask-wearing and social-distancing protocols will be crucial in curbing the further spread of the virus.

“Every single unnecessary contact any of us have is a potential link in a chain of transmission that will lead eventually to a vulnerable person,” he said. “So, the absolute key is for all of us to think do we really need to have this contact?”

The World Health Organization has also called on neighboring European countries to intensify coronavirus measures as the region deals with a new and more contagious variant that was first detected in the UK.

WHO Europe Director Hans Kluge confirmed that the UK variant has now been identified in more than twenty countries across Europe.

“It is our assessment that this variant of concern may, over time, replace other circulating lineages as seen in the United Kingdom, and increasingly in Denmark,” he said during a news briefing.

“With increased transmissibility and similar disease severity, the variant does, however, raise alarm. Without increased control to slow its spread, there will be an increased impact on already stressed and pressurized health facilities.”