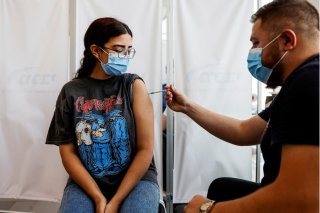 According to the CDC, recent data are indeed indicating booster shots are needed for certain populations.

“Studies show that after getting vaccinated against COVID-19, protection against the virus may decrease over time and be less able to protect against the Delta variant. Although COVID-19 vaccination for adults aged sixty-five years and older remains effective in preventing severe disease, recent data suggest vaccination is less effective at preventing infection or milder illness with symptoms,” the agency writes.

“Emerging evidence also shows that among healthcare and other frontline workers, vaccine effectiveness against COVID-19 infections is decreasing over time. This lower effectiveness is likely due to the combination of decreasing protection as time passes since getting vaccinated (e.g., waning immunity) as well as the greater infectiousness of the Delta variant,” it continues.

Moreover, data from a clinical trial revealed that a “Pfizer-BioNTech booster shot increased the immune response in trial participants who finished their primary series six months earlier. With an increased immune response, people should have improved protection against COVID-19, including the Delta variant.”

The CDC’s approval of the booster shots also enables fully immunized people to pair their extra doses with those different manufacturers, as studies conducted by the National Institutes of Health showed that it was safe and effective to mix and match vaccines.

The agency has noted that nearly twelve million Americans already have received their booster shots and that tens of millions more are waiting to be inoculated. Here are the people who are in the front of the vaccine lines right now.

Nearly fifty million Pfizer-BioNTech vaccine recipients who got both shots at least six months ago are now eligible for boosters. These individuals include anyone sixty-five and older and all adults aged eighteen to sixty-four who have cancer, dementia, diabetes, heart disease, HIV, and other medical conditions that increase their likelihood of coronavirus complications. Others include those who are eighteen or older who live or work in a long-term care facility, homeless shelter, and prison and front-line personnel who are at a higher risk of exposure due to their occupation, such as first responders and grocery store workers.

Roughly thirty-nine million Moderna vaccine recipients are now eligible for the boosters. The CDC has adopted the same criteria for Moderna recipients as Pfizer-BioNTech, as both companies tap into the same mRNA technology for their vaccine doses.

Nearly thirteen million Johnson & Johnson vaccine recipients are now eligible for the extra shot. However, the CDC has adopted slightly different criteria for this particular vaccine. Those who are eligible include all adults who were vaccinated with Johnson & Johnson’s vaccine at least two months ago. In addition, there is no need to have an underlying medical condition or a high-risk occupation to get the booster.