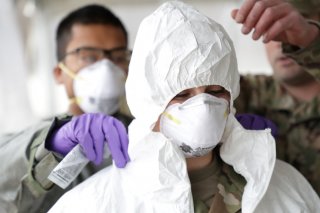 Rhode Island is one of the few states with a declining daily average of positively tested coronavirus cases, as restaurants and businesses open, museums welcome visitors and indoor venues allow up to 125 people. The state is surrounded by early coronavirus hotspots like Boston, New York and New Jersey but still remains below the threshold. How did Rhode Island do it?

Democratic Governor Gina Raimondo led the state through the virus, without any federal funding support. She adopted strategies from countries like South Korea and New Zealand that put an emphasis on mass testing, intensive contact tracing and applying a statewide mask mandate.

“I had this moment of clarity very early on, at 2 a.m. when I was working in my home alone. There’s no way you can outrun this thing. You have to stay a step ahead. That’s when we said we need aggressive testing, very aggressive contact tracing and social distancing. We came to that realization earlier than some other places, because it seemed like the only way to keep a lid on the virus.” Raimondo told Politico in an interview.

The two-term governor said that President Donald Trump should have used the Defense Production Act to “mobilize all the best of what America has to offer - innovation, testing, PPE [personal protective equipment], medical products,” by connecting with major businesses to help supply areas in need of medical supplies.

“We were getting zero direction or guidance from the federal government,” Raimondo said.

“You know, this entire crisis would have played out so differently with leadership and a national plan from the federal government. If the Trump administration in January had started to stockpile PPE, get serious about testing, put together a plan, we would have far fewer deaths, far fewer people out of work, far fewer sick people,” she said.

Without help from the White House, Raimondo had to devise another plan - she cold-called chief executive officers for help with getting PPE and increased access to testing.

Raimondo convinced CVS, the state’s largest employer, to partner to make drive-through testing widely available. She also deployed the National Guard to initiate the opening of these sites, where more than 25 percent of Rhode Islanders have been tested.

In efforts to tame the virus more, Raimondo contacted the CEO of Salesforce, Marc Benioff, to help with contact tracing. She knew that Salesforce had strong technological software that could lead the development of an app that tracks down potential contacts that have COVID-19.

“They sent a whole team of people to Rhode Island, virtually, for free, and helped us build software for our contact tracers,” she said.

The CRUSH COVID RI App tracks a users’ location, so that they can identify who and where they may have contracted the virus. The app also has a survey feature that asks users about their symptoms and how they’re feeling.

Raimondo said that the next issue she plans to tackle is the reopening guidelines that will be implemented in schools in the fall.

“We need to get our kids back to school. They deserve an education. Their mental, physical and emotional development is suffering,” she said.

To open schools safely, she said more access to testing and tracing, a continued mask mandate and Plexiglas will be needed.

As of Tuesday, Rhode Island has just over 15,000 confirmed cases and around 1,000 deaths, according to Johns Hopkins University coronavirus data.