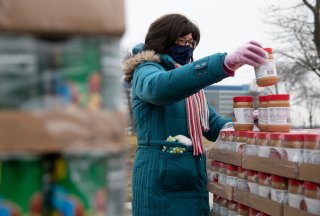 Even though it is mostly positive regarding the current state of the global economy, the International Monetary Fund (IMF) has sounded the alarm that the new coronavirus variants circulating around the globe pose a major threat to the world’s post-pandemic recovery.

The organization now anticipates that the global economy will expand 5.5 percent this year—a 0.3 percentage point increase from October’s forecasts, according to its recently published World Economic Outlook.

“Much now depends on the outcome of this race between a mutating virus and vaccines to end the pandemic, and on the ability of policies to provide effective support until that happens,” the IMF’s Chief Economist Gita Gopinath said in a blog post.

“There remains tremendous uncertainty and prospects vary greatly across countries.”

As for emerging markets, China is set to expand by more than 8 percent this year.

“China returned to its pre-pandemic projected level in the fourth quarter of 2020, ahead of all large economies,” Gopinath noted.

“The United States is projected to surpass its pre-COVID levels this year, well ahead of the euro area.”

The IMF added that governments should keep supporting their respective economies via robust fiscal stimulus packages, which should help in their eventual economic recoveries.

“Policy actions should ensure effective support until the recovery is firmly underway, with an emphasis on advancing key imperatives of raising potential output, ensuring participatory growth that benefits all, and accelerating the transition to lower carbon dependence,” Gopinath explained.

According to a recent study out of the University of Southern California, the ongoing pandemic could result in net losses of between $3.2 trillion and $4.8 trillion in real GDP in the United States over the course of two years.

Real GDP is a measure, adjusted for inflation, that reflects the value and the quantity of final goods and services produced by a particular country’s economy in any given year.

The research, published in the journal Economics of Disasters and Climate Change, noted that the pandemic’s economic impact largely depends on factors such as the duration and extent of the business closures, the reopening process, infection rates and fatalities, the avoidance of public places, and the level of pent-up consumer demand.

“In a best-case scenario, we would see containment measures, such as masks and social distancing become more widespread . . . and then businesses and institutions would be able to reopen at an accelerated pace,” the study’s team leader Adam Rose, director of the USC Center for Risk and Economic Analysis of Terrorism Events, said in a news release.