Inflation: Why You Might Not Love That $1,400 Stimulus Check 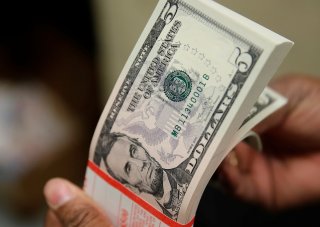 The American Rescue Plan was signed by President Joe Biden in early March, and amid its numerous provisions, it did two major things. It injected $1.9 trillion into the economy, and it put $1,400 checks in the hands of most Americans.

This move was meant to stimulate the economy, as did the checks that were distributed in 2020, under the previous administration, in order to give Americans a hand as the coronavirus pandemic recedes. But that huge level of spending has led to concerns from some quarters that the injection of money could cause the economy to “overheat,” and to possibly cause inflation. That, leading to rising interest rates, could potentially lead to economic pain down the line.

A key inflation report was issued Tuesday, according to CNBC, with the consumer price index (CPI) rising 0.6 percent in March and 2.6 percent from a year ago. Both were slightly higher than analysts had expected. Half of that total, however, was taken up by the rise in gasoline prices.

It’s worth pointing out that prices, of gas and other things, were considerably lower than normal in the month of March 2020, with the start of the pandemic and stay-at-home orders going into effect that month. Also, gas prices have begun to stabilize in recent weeks.

How worried should people be about inflation? Economists and other experts differ on that point.

Reuters reacted to the news by stating that the CPI rise kicked off “what most economists expect will be a brief period of higher inflation.” Others quoted by Reuters stated that the inflation number is likely to affect the markets today less than another piece of news, the government recommendation that injections of the Johnson and Johnson vaccine for coronavirus be paused.

“While the jump in CPI is pretty significant, the market may take it with a grain of salt—it could already be priced in as the market has been skittish about rates for some time,” said Mike Loewengart, the managing director at investment strategy at E*TRADE Financial, told Reuters.

In February, prior to the enactment of the Rescue Plan Larry Summers, a former secretary of the treasury and top economic adviser in the Clinton and Obama administrations, wrote an op-ed in the Washington Post, arguing that the enactment of the package could lead to inflation.

The Rescue Plan, Summers warned in the op-ed, threatened to “set off inflationary pressures of a kind we have not seen in a generation, with consequences for the value of the dollar and financial stability.”

The current secretary of the treasury, Janet Yellin, pushed back on that during a TV appearance in March, per the New York Daily News.

“That’s also a risk that we have to consider,” Yellen, the former Fed chairwoman, said on CNN. “We have the tools to deal with that risk if it materializes, but we face a huge economic challenge here and tremendous suffering in the country.”

“The nature of a bottleneck is that it will be resolved and the supply side will adapt,” Powell said last week at an International Monetary Fund event, per NPR. “Whatever cost people have to bear because supplies are temporarily tight as the economy reopens, those won't be repeated next year.”

The White House itself addressed the inflation worries in a blog post earlier this week, authored by economic advisers Jared Bernstein and Ernie Tedeschi.

“The COVID-19 pandemic has caused an unconventional recession, and we do not expect the recovery will be typical either,” Bernstein and Tedeschi wrote. “While the paramount policy goals are to control the virus, get to full employment, and make the necessary investments for a more resilient and inclusive recovery, economic uncertainties and risks demand careful attention going forward. One risk the Administration is monitoring closely is inflation.”

They added that they expect inflation to increase somewhat in the coming months, due to pent-up demand, supply chain disruptions and base effects. They predicted that inflation will rise temporarily, for those reasons, before fading back before long.

“We will, however, carefully monitor both actual price changes and inflation expectations for any signs of unexpected price pressures that might arise as America leaves the pandemic behind and enters the next economic expansion.”

Bruce Bartlett, a former aide to Ronald Reagan who has since turned against conservative economic orthodoxies, wrote for The New Republic in mid-March about what he sees as situational criticisms by Republicans of deficit spending and potential inflation.

“It’s been an article of faith among conservatives since the beginning of the financial crisis in 2008 that inflation is right around the corner. This conviction follows from a core conservative belief that inflation invariably results from increases in the money supply,” Bartlett wrote, citing similar predictions in the early days of the Obama Administration that never came to pass, both after that administration passed the American Recovery and Reinvestment Act, and when the Fed instituted qualitative easing.

“I don’t know if there has been a permanent change in the relationship between the money supply and inflation, as some advocates of Modern Monetary Theory claim. But I do know that we have paid a heavy price for believing the conservatives who cried wolf about inflation year after year without any evidence supporting their predictions.”