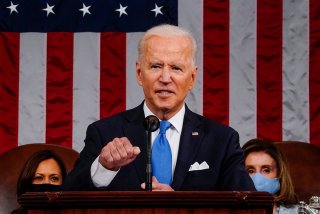 President Biden on Wednesday night delivered his first address as president to a joint session of Congress. As expected, the president did not announce a new round of universal stimulus checks, but he did tout the success of his American Rescue Plan, while also laying out his trillion-dollar packages for later this year, the American Families Plan and American Jobs plan. One of those plans, if passed, will indeed offer direct payments, in the form of an extended child tax credit.

Biden shared correspondence he had gotten from Americans following the passage of the Rescue Plan, including a woman in Texas who was saved from eviction and a grandmother in Virginia who was able to take her granddaughter to the eye doctor, after not doing so for months.

The president also brought up other provisions of the Rescue Plan act, including food, nutrition and eviction assistance, that have made a different in Americans’ lives.

“Maybe most importantly, thanks to the American Rescue Plan, we are on track to cut child poverty in America in half this year,” Biden said.

As for the other plans, Biden described the American Jobs Plan, which focuses on physical infrastructure, as “a once-in-a-generation investment in America itself” and “the largest jobs plan since World War II.” He also talked up that the majority of jobs that would be created by the Jobs Plan would be blue-collar ones, that do not require a college degree.

The American Families Plan, the president said in the speech, will fund four key priorities: Expanded access to education, affordable child care, up to 12 weeks of paid family and medical leave, and “money directly into the pockets of millions of families.”

“Together, let’s extend the Child Tax Credit at least through the end of 2025,” Biden said in the speech. A leading House Democrat, Richard Neal of the Ways and Means Committee, proposed a plan last week that would make that extension permanent.

“On our way forward to a Union more perfect. More prosperous. More just. As one people. One nation. One America,” Biden said in the conclusion of the speech.

“It’s never been a good bet to bet against America. And it still isn’t. We are the United States of America. There is nothing – nothing – beyond our capacity – nothing we can’t do – if we do it together.”