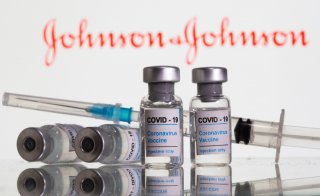 The staff at the U.S. Food and Drug Administration has given its endorsement of Johnson & Johnson’s coronavirus vaccine for emergency use, a critical step in bringing a third shot to the U.S. marketplace.

The company’s one-shot vaccine was shown to provide strong protection against severe disease and death from the virus and may reduce its spread by those who are inoculated, according to new analyses posted online by the FDA.

And unlike Pfizer-BioNTech and Moderna, Johnson & Johnson’s vaccine requires only one shot. But how much of a game-changer is it?

“The single-dose regimen will definitely help to speed up the vaccination programs by simplifying the vaccine delivery logistics and making it more convenient for the recipients of the vaccine,” Dr. Lee Riley, professor and chair of the Division of Infectious Disease and Vaccinology at the University of California, Berkeley, told the National Interest.

“Any effective vaccine is a game-changer, but a single-dose vaccine like the Johnson & Johnson vaccine may shorten the time to achieve herd immunity.”

Dr. Pavitra Roychoudhury, an instructor in the Department of Laboratory Medicine and Pathology at the University of Washington, says she believes that the Johnson & Johnson vaccine will help further boost the overall numbers of those willing to roll up their sleeves for the shot.

“It means we’ll be able to vaccinate twice as many people and save time and logistical costs of coordinating second doses,” she told the National Interest. “So, definitely a huge positive if it is approved.”

Another advantage of Johnson & Johnson’s vaccine is that it can be stored at normal refrigeration temperatures for at least three months, making its distribution across the country considerably easier compared to the other vaccines on the market.

However, the public’s access to Johnson & Johnson’s new vaccine could be limited at first. Dr. Richard Nettles, the vice president of U.S. medical affairs at Janssen Pharmaceuticals, the drug development arm of Johnson & Johnson, told lawmakers that nearly four million doses are ready for shipment, far below the twelve million it had originally pledged.

The FDA staff report is meant to brief the agency’s Vaccines and Related Biological Products Advisory Committee, which will meet Friday to review Johnson & Johnson’s request for emergency use authorization.